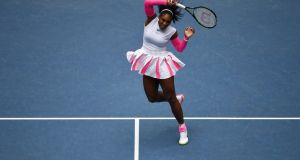 Serena Williams returns a shot to Johanna Larsson during their third round match at the US Open at Flushing Meadows in New York. Photograph: Mike Hewitt/Getty Images

Another win, another milestone for Serena Williams who rolled into the US Open last 16 on Saturday by crushing Sweden’s Johanna Larsson 6-2 6-1 to collect Grand Slam victory number 307 – the most by a woman in the Open era.

As in the majority of her victories at the majors, Williams operated with ruthless efficiency but displayed little fire as she coolly dispatched the 47th-ranked Swede in exactly one hour.

The victory moved the 34-year-old American past Martina Navratilova and level with Roger Federer for most Grand Slam victories by a man or woman.

Williams will go for number 308 and a step closer to what would be a record seventh US Open title when she meets Kazakhstan’s Yaroslava Shvedova, a 6-2 7-5 winner over China’s Zhang Shuai.

Radwanska, who had been extended to three sets in three of her four matches against 25th seed Garcia, romped into the last 16 with a 6-2 6-3 victory in breezy conditions at Louis Armstrong Stadium.

It will be the 27-year-old Radwanska’s fifth trip to the fourth round at the US Open but she has failed to advance beyond that stage in New York, unlike the other Grand Slams.

Radwanska was runner-up to Serena Williams at Wimbledon in 2012, becoming the first Grand Slam finalist from Poland in the Open era. She is a twice semi-finalist at the Australian Open and has reached the quarter-finals at Roland Garros.

“That means everything,” Radwanska said on court about her goal to go deeper into the year’s last Grand Slam championship.

“I hope I can play even better than today in the next round and reach my first quarter-final here.”

Radwanska, who won her 19th career WTA title last week in the New Haven warm-up event for the Open, gave herself a high grade for her display against the 33rd-ranked Garcia.

The steady baseline player was near perfect with her groundstrokes, registering only five unforced errors, as she pressed Garcia into 34 errors and broke the big-serving Frenchwoman six times.

“I think I was playing good tennis from the beginning,” she said. “I was very solid from my serves and able to return her huge serves.

“I thought I was really doing a good job from the beginning to the end.”

Standing in her way to an elusive berth in the quarters will be either American Varvara Lepchenko or Ana Konjuh of Croatia, both unseeded.

Halep came into the match having dropped nine games in her opening two matches and looked ready to make speedy work of Babos but she needed two hours and eight minutes on an overcast Arthur Ashe Stadium court to secure her place in the last 16.

After blitzing the opening set in 24 minutes, Halep meekly surrendered the second to the 34th-ranked Babos, who had been knocked out in the opening round in four previous visits to Flushing Meadows.

Babos continued to apply the pressure in the third, breaking Halep at the first opportunity, but the fiery Romanian battled back, angrily smashing her racket on to the court before holding serve for a 5-4 lead.

Halep was gifted her place in the fourth round when Babos double-faulted to hand her the break and match.

“I don’t know how I came back,” Halep told reporters. “I felt like I didn’t play my best but I was fighting to the end for every ball.

“I was trying to push her back. I was trying to run for every ball. I did everything I could today and I’m really happy I could finish the match in my way.”

Next up for Halep is 11th-seeded Spaniard Carla Suarez Navarro who advanced with a tidy 6-4 6-3 win over Russian Elena Vesnina.

Maguire holds steady as Munoz leads in Scotland 17:08
Lewis Hamilton claims pole position in Barcelona 15:42
Dublin SFC match called off due to positive Covid-19 test 15:34
Mikel Arteta given more control at Arsenal as Raul Sanllehi leaves 14:17
As ever, Ronnie O’Sullivan sparks debate at the Crucible 15:37
Here is your handy guide to sport on television this week