Sailing: Five classes decided on final race as sun comes out to play 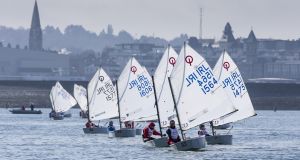 Long-awaited summer-like sunshine graced the 196-boat fleet on the final day of the Volvo Youth Sailing National Championships on Dublin Bay on Sunday where five class titles were decided on the final race.

Two straight wins from last Thursday’s series opener for Howth Yacht Club’s Jamie McMahon weren’t enough to sustain him into the final day in the Laser Radial class that was won by Jack Fahy of the Royal St George YC.

Fahy’s clubmate Tom Higgins also managed to take second overall leaving McMahon to take third place in a class where any one of five top boats were likely overall winners.

Arguably the highest-pressure class of the event was the Optimist fleet where 78 single-handers competed in 10 races in an effort to secure a place on five national teams for world and continental championships.

Justin Lucas of the Royal Cork YC emerged overall winner by a single point over Howth’s Johnny Flynn while Emily Riordan of the Royal St George YC was top girl.

In the 16-strong International 420 class, girl crews filled the podium led by Nicola Ferguson and Fiona Ferguson of the National YC ahead of Gemma McDowell and Emma Gallagher of Malahide YC in second and Grace O’Beirne with Kathy Kelly of the Royal St George YC in third.