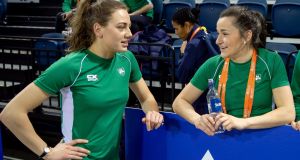 Both heat and lane draws can often double their weight and value when it comes to indoor championship running, at least in events up to and including 800 metres, and for better or for worse the Irish athletes in Glasgow are about to find out why.

The starting lists now confirmed for Friday’s opening sessions of the 35th European Indoor Championships brought mixed news - Phil Healy nicely positioned out in lane six for her 400 metres heat, while both Thomas Barr and Cillin Greene both have the more difficult lane two to contend with.

Drawn in the third of seven heats (the event properly stacked), Healy’s 52.32 season’s best ranks her the fastest in her heat: with the top two plus the four fastest losers advancing to the semi-finals later in the evening, the Cork woman will certainly fancy her chances. Sophie Becker, drawn in the second heat, faces the opposite - a tough lane two draw, and four faster women outside her. It will take something special for her to progress.

Barr, more used to facing 10 three-foot hurdles over the 400m, also has the more difficult inside lane. Drawn in the last of four heats, he also has Norway’s Karsten Warholm to his outside, also a 400m-hurdle specialist, but with an indoor best of 45.56. Barr’s best of 46.87 will likely need matching if he’s to progress. For Greene, just turned 20 and making his first senior appearance, his 47.19 ranks him slowest in his heat.

Things didn’t go to plan for Barr when he found himself pushed off his stride at the 200m break in the 400m at the Irish Indoors two weeks ago, but the European outdoor bronze medallist over 400m hurdles is still excited about Glasgow. “Indoor running, for me, is completely different,” he said “There’s always a bit of rough and tumble, which I’m not quite used to. In a 400m hurdles it’s all about running your own race. Here it’s all about tactics, other athletes getting involved. Hopefully I can get a clean, fast race here.”

No such worries for Mark English, looking for a first final place since winning silver at the 2015 European Indoors in Prague. Drawn in the third heat, his season best of 1:46.92 also ranks him fastest of the lot. Conal Kirk in heat two, and Zak Kirwan in four, face a little more daunting opposition, Andreas Kramer of Sweden, a 1:46.52 man, also in heat four.

Ciara Mageean has made no secret of her intention to make the 1,500m final, and drawn in the second of three heats, her recent Irish record of 4:06.76 ranks her second fastest being Simona Vrzalova of the Czech Republic (4:05.73). As long as she stays out of trouble Mageean should progress.

John Travers and especially Sean Tobin will also be trying hard to make it out of the 3,000m heats, Tobin just back from an extended spell of warm-weather training in Australia. In the evening session, Sommer Lecky of Finn Valley will also make her first senior appearance in Group A of the women’s high jump qualification, the World Under-20 silver medallist won’t feel out of her depth - or rather height.