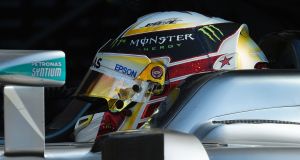 Lewis Hamilton stops in the pits during a practice session at the Spa-Francorchamps circuit ahead of the Belgian Formula One Grand Prix. Photograph: Getty Images

World champion Lewis Hamilton will start the Belgian Grand Prix from the very back of the grid after serving a mammoth 30-place penalty following changes to his engine on Friday.

Hamilton, who leads his Mercedes team-mate Nico Rosberg by 19 points in this year’s championship race, was already staring at a grid drop after his team confirmed he had taken on a number of new engine components, and thus exceeding the allocation the sport’s complicated rules permit.

Indeed his penalty could yet rise to as high as 75 places should Mercedes opt to fit further new parts to his engine — in order to ensure he does not incur any further penalties in the remaining races this season — before qualifying on Saturday.

But with only 22 drivers on the grid, the size of Hamilton’s punishment actually matters little with the world champion simply ordered to the back of the field, and not incurring a further timed penalty.

He will be joined there by McLaren’s Fernando Alonso, who will serve a 30-place grid drop for also using more engine parts than is allowed.

It means Hamilton may now choose to run only once in qualifying — he has to set at least one competitive time — with his grid position for Sunday’s race already sealed.

But such a scenario will come as a blow to the thousands of British fans who have travelled in excess of 300 miles to Belgium in anticipation of seeing a straight fight between the world champion and Rosberg for pole position.

They will however, be provided with the tantalising prospect of watching Hamilton storm back through the field in Sunday’s race.

“It was a straightforward day for me but a tough one for the guys in the garage with the engine change,” said Hamilton, who was off the pace in practice as he concentrated solely on his race strategy as he bids to become the first driver in Formula One history to win from last on the grid.

“Massive respect and a big thanks to them for all their hard work. The important thing is that we got through our programme smoothly today and can start focusing on the rest of the weekend.”

The engine penalty has been looming over Hamilton after he encountered several failures in the opening rounds of the season.

Hamilton’s Mercedes team had been weighing up whether to take the grid drop here at Spa-Francorchamps or at next Sunday’s Italian Grand Prix, with both circuits expected to offer him the best chance of fighting back through the field.

But a decision was taken by Formula One’s all-conquering team to incur the penalty on the sport’s return to action following its traditional mid-season break.

The Red Bull duo of Max Verstappen and Daniel Ricciardo led the way in practice on Friday, but Rosberg will be expected to secure pole as he bids to get his championship challenge back on track after seeing Hamilton win six of the last seven grands prix.