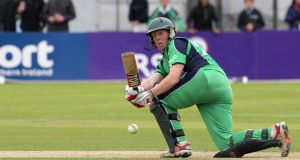 Kevin O’Brien in action for Ireland against Pakistan in the one-day international at Clontarf during the week. Photograph: Inpho

It’s a mark of just how far Irish cricket has come in the past six years that Kevin O’Brien’s immediate emotion at hitting the boundary to tie Thursday’s thrilling first RSA Insurance Series One-Day International at Clontarf was one of deflation at the missed opportunity of another famous victory over Pakistan.

With the world’s best one-day bowler in off-spinner Saeed Ajmal at the other end and needing 15 runs for victory, the odds were firmly stacked in favour of the visitors on a bitterly cold evening.

Not ideal conditions then for a finger spinner, and O’Brien and Trent Johnston missed out on full tosses before O’Brien launched Ajmal on to the clubhouse roof off the fourth ball before scampering a two to set up the last-ball thriller.

A six for victory was always on the cards with O’Brien on strike, but Ajmal darted one down the legside, with O’Brien admitting afterwards that it would have probably been called a wide if he had left it alone.

It was too big a risk to take and he swatted the ball away to backward square leg to secure the tie, although many of the supporters in the 2,000-strong crowd had to wait until the PA announcer confirmed the result. They were not alone as some of the Pakistan players even had to ask the umpires, such was the nature of the Duckworth Lewis calculations.

The fact that a first-ever home ODI win over a top-ranked Test nation had slipped by was what nagged at O’Brien, even though he mellowed somewhat when he was congratulated by family and friends afterwards following his unbeaten 84 off just 47 deliveries. “To come so close and not get over the line is going to be tough to take initially, but when we reflect on the game and think about it, it will probably become a little easier to take.”

The chance to go that step further will come tomorrow at what is expected to be a sold-out Clontarf in the series decider.

Pakistan are again likely to be at full strength, while Ireland coach Phil Simmons must make a decision on whether all-rounder John Mooney will return to the side following suspension.

“There’s no reason to fear Pakistan,” admitted O’Brien. “They are obviously a great side, you have to give them the respect they deserve but if the ball bounces another way on Sunday we come away with a victory.

“We just have to look at where we didn’t quite perform today as a team and collectively and come back on Sunday and improve it.”

Run chase
One player whose form against Pakistan needs little improvement is Ireland opening batsman Paul Stirling, who completed back-to-back centuries against them on Thursday to help set up the run chase.

And former Ireland skipper Johnston is sure that the 22-year-old Middlesex player is in the process of becoming Ireland’s greatest ever batsman. “Without a shadow of a doubt that kid will go down in history as Ireland’s best batsman,” said Johnston after Stirling’s 103 from 107 balls. “He’s one of the cleanest strikers of a cricket ball I’ve ever seen, either that I’ve played with or against or even watched on TV.”