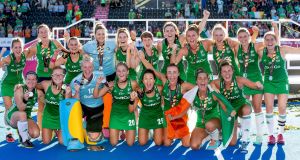 Ireland team: on a sure footing for next summer’s European Championships in Belgium and their qualification process for the Tokyo Olympics in 2020. Photograph: ©INPHO/Morgan Treacy

After a valiant two weeks of hockey, Ireland’s sparkling run in the Women’s Hockey World Cup in London’s Queen Elizabeth Park came to an end when they were beaten 6-0 by the Netherlands in the final.

Ireland’s performance earned them the silver medal and a ranking that will place them among the top 10 teams in the world.

It was the most successful run ever by an Irish hockey team at World or European level, the best before that coming from the men’s team when they won the bronze medal at the 2015 European Hockey Championships.

Supported by thousands of family and friends in a stadium just a few hundred metres away from the 2012 Olympic Stadium, now occupied by London football club West Ham United, Ireland were beaten by a technically better Dutch side.

Captain Katie Mullan and her team would have preferred a better final score line but there will be no complaints about the outcome.

Graham Shaw, the Irish coach, said people should judge this side by their performance over the last two weeks and not from a performance against the Dutch.

“To come in here now and finish second in the world is a truly remarkable achievement,” said Shaw. “I think it’s an achievement that won’t really sink in until I reflect on it. A little bit disappointed with today. I felt if we could get to quarter time and keep it at nil-all, they might have got a little bit nervy. But hats off to them. They are a top, top side.”

The Dutch, ranked the number-one side in the world, controlled the match from the beginning to lead 4-0 at half time and pushed on from there to confirm their dominance with two more goals in the second half.

Although Ireland stubbornly defended as they had done in the quarter-final and semi-final, which went down to penalty shootouts against India and Spain, the narrative in the final was clear from early in the match when Lidewij Welten opened the Dutch scoring from play after seven minutes.

Ireland held them to 1-0 for the first quarter but the powerful Dutch claimed three more goals in the second quarter for 4-0.

Two more quick goals after half time silenced most of the 10,000 fans, most of whom were supporting the Irish team.

Despite the score line, Ireland will look on the fortnight as a huge success, which drew positive attention from the media and from outside the normally confined hockey circles.

Ireland beat USA, India twice and Spain, who all have a higher world ranking. Those wins will also put Ireland on a sure footing for next summer’s European Championships in Belgium and their qualification process for the Tokyo Olympics in 2020.

Ayeisha McFerran, the 22-year-old Irish goalkeeper from Larne, was awarded goalkeeper of the tournament, which puts her up with the best in the world.

“We fought the whole way and the girls are walking around with a silver medal around their necks. We can’t complain,” said McFerran.