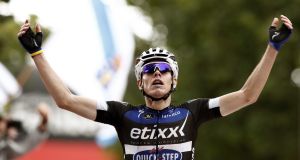 Spain’s David de la Cruz snatched the red jersey in the Vuelta a Espana with a dramatic stage nine victory.

Etixx Quick-Step rider De la Cruz staged a breakaway with just 600m of the 164.5km stage from Cistierna to Oviedo remaining to leave Dries Devenyns 27 seconds in his wake and Moreno Moser a further six seconds back.

The gap he established over race leader Nairo Quintana was enough to leapfrog him in the overall standings, and he will take a 22-second advantage into stage 10.

Quintana finished in a group with Britain’s Chris Froome, Johan Esteban Chaves and Alberto Contador two minutes and 56 seconds behind the winner.

Froome’s Team Sky colleague Leopold Konig was among the same clutch of riders as it crossed the line.

“I wasn’t thinking about the (overall) lead at the end. I was so close to winning the stage, that was my main objective,” said De La Cruz.

“It was very hard to ride with Devenyns because he was hard to beat, but I am the leader as well. I can’t believe it.