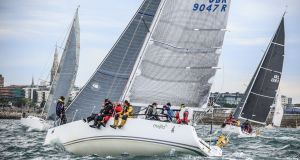 Irish Sea Champion J109 Mojito (Vicky Cox and Peter Dunlop) from North Wales is one of the first entries into June’s 40th anniversary of the Round Ireland Race. Photo: David O’Brien

The Irish Sea Offshore (ISORA) champions Vicky Cox and Peter Dunlop showed the depth of their Round Ireland Race ambitions this week when the North Wales J109 was one of the first entries into June’s 40th anniversary offshore race from Wicklow.

The Wolf Head Trophy winners are in pursuit of their first Volvo title having finished 14th in 2016.

They came closer to a major Irish offshore race title off the Kerry coast last season before being edged out for Dun Laoghaire to Dingle Race honours in the last few miles by Paul O’Higgins’s JPK1080 Rockabill VI.

Cox and Dunlop are the first of three entries so far for the 2018 race, an edition that marks the 40th year anniversary of the biennial 700-miler on June 30th.

The race starts at 14.00 from Wicklow Sailing Club and the course, one of the longest in the Royal Ocean Racing Club (RORC) calendar. leaves ‘Ireland and all its islands, excluding Rockall, to starboard’.

Also signed up for the Round Ireland is Ross Hobson’s Pegasus of Northumberland, the two-handed line honours winner of the 2017 Fastnet Race.

In Miami, gear failure put paid to a good start to Aoife Hopkins’ 2018 World Cup bid but thankfully the U21-Radial European Champion bounced back in the decidedly light winds of race three on Wednesday with a 26th to be placed 57th from 68.

Also in Florida, in the men’s Laser division, the National Yacht Club’s Finn Lynch is 38th from 70 on Biscayne Bay. The Irish Rio representative comes to Miami straight from a podium finish at December’s Gran Canaria Olympic Week. The two Irish Tokyo 2020 hopefuls are among 540 sailors gathered for the second round of the 2018 World Cup Series, running until Sunday.

The Irish Cruiser Racing Association (ICRA) has postponed next month’s annual conference until the Autumn. It follows ‘strong representations’ about its timing aired at last week’s symposium in Limerick.

The Association is seeking to map a five-year-plan but last week’s resignation of a board member over a controversial decision to stage the national championships in Galway means choppy waters for the voluntary body. The goal now, according to the ICRA executive, is to have ‘a fully thought out set of proposals’ prepared for the autumn.

Ireland’s first Vendee Globe entrant Enda O’Coineen will resume his circumnavigation of the world today (Friday). His race came to an end last year when Kilcullen Voyager-Team Ireland dismasted on New Year’s Day 2017 off New Zealand, halfway through the race from France.

More than a year later and with a new IMOCA 60, made up from another Vendée dropout, Souffe du Norde and his own Kilcullen Team Ireland boat the Galway Bay man is underway again.

“I’m officially out of the race so we’re going to unofficially re-enter and finish it,” said O’Coineen. He anticipates a two-month solo voyage from Dunedin to the French finish line in Les Sables.

Photo caption: Irish Sea Champion J109 Mojito (Vicky Cox and Peter Dunlop) from North Wales is one of the first entries into June’s 40th anniversary of the Round Ireland Race. Photo: David O’Brien