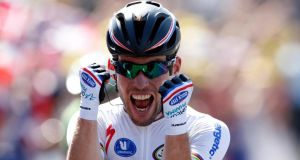 Mark Cavendish celebrates as he crosses the finish line to win the 173 km 13th stage of the Tour de France from Tours to Saint-Amand-Montrond. Eric Gaillard/Reuters

The perils of being a race leader with a weakened team were glaringly exposed on the open roads leading here yesterday. After several stages in which they have not looked at their best, Team Sky were unable to prevent several of Chris Froome’s closest rivals, led by Alberto Contador, from gaining more than a minute on the race leader after what should have been a routine flat stage.

The main beneficiary was a former Sky rider, Mark Cavendish, whose Omega Pharma — Quick-Step team ripped the race to shreds and were rewarded by their sprinter’s second stage win of the race.

The critical moment came 31km from the finish on a particularly exposed stretch of road, with the wind blowing from the left, as it had been for most of the stage. Froome and Contador were part of a reduced lead group and, as the road gradually rose, Contador’s Saxo Bank team-mate Daniele Bennati could be seen looking back down the line. What he saw was Froome leaving a gap in the line as he and the other members of Contador’s team raised the pace; after a few seconds, the yellow jersey swung out to the left in the hope that someone else would take up the chase.

At that key instant, none of Team Sky were able to close the few metres. Immediately Bennati, Nicolas Roche, Michael Rogers, Roman Kreuziger, Matteo Tosatto and Contador piled on the pressure, with Cavendish and two team-mates, the points leader Peter Sagan, the Belkin duo of Laurens Ten Dam and Bauke Mollema and the Danish climber Jakob Fuglsang sitting in their slipstream.

Sky tried to chase but had neither the strength nor the numbers – with the lead group travelling at 55km per hour, they needed to be doing well over 60 – and one by one Kanstantsin Siutsou, Geraint Thomas and Ian Stannard succumbed.

At the finish, Froome was completely alone in a group of 43; it was a stage when the loss of Edvald Boasson Hagen, who quit the race due to a broken shoulder, was sorely felt. The eventual time loss of one minute eight seconds was not catastrophic but as Froome said: “It was a reminder that this race is 100 per cent open and that I need to be awake at all times.”

Following the loss of Boasson Hagen, Sky’s head, Dave Brailsford, had said his team would need to be resourceful; Contador, however, looks to be the one who can improvise on the road.

Tactically perfect
The finish sprint was not exactly a formality for Cavendish, as he had Sagan to contend with, but it was tactically perfect. His team-mate Niki Terpstra attacked at a kilometre to go, forcing Sagan’s lone team-mate Maciej Bodnar to use his energy chasing him down, after which the Manxman’s other team-mate Sylvain Chavanel manoeuvred the Slovak to the front of the string so that Cavendish could use his slipstream to take his 25th Tour de France stage win. He is now up to third in the all-time lists and his confidence has been restored.

Cavendish and his Omega Pharma team-mates forced the initial split in the field, 113 kilometres from the finish, when they realised the wind might create chaos; after the initial split, the triple stage winner Marcel Kittel was left a little way behind, and they had a perfect opportunity to put him and his Argos-Shimano team-mates under pressure.

That created a lead group of about 90, with Kittel and company chasing hard behind. Froome could count himself lucky not to share the fate of Alejandro Valverde, who started the stage second overall, but punctured as the battle between Omega Pharma and Argos reached its height. Five team-mates waited for him but they were unable to close a gap of 30 seconds, and eventually waited for Kittel and company. Realising they had an opportunity to ride for second place behind Froome, Ten Dam and Mollema’s Belkin team-mates piled on the pressure in their turn to keep Valverde at bay.

The Spaniard’s eventual time loss was almost 10 minutes; his chances of winning the Tour had been eliminated completely by a single stroke of ill luck in a stage run off at an average of more than 47kph.

It was a stage when racing instincts mattered as much as sheer strength and here, perhaps, Froome’s relative inexperience played against him, along with Sky’s lack of bodies to shield him.

Yesterday’s roads were flat but in their way they were as demanding as any mountain stage.
Guardian Service