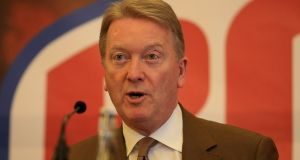 Frank Warren hinted he plans to recruit fighters from promotional rivals Matchroom after agreeing a television deal with BT Sport.

From February Warren is scheduled to stage 30 promotions, 20 of which will be broadcast by BT Sport while all 30 will be shown on Warren’s subscription network BoxNation.

The overseas fights BoxNation wins the right for will not appear on BT Sport, but in the same way the broadcaster’s involvement in boxing is the latest development in its rivalry with Sky Sports, BT’s resources will intensify Warren’s rivalry with Matchroom’s Eddie Hearn.

Warren had long been relatively unchallenged as Britain’s leading fight promoter but Hearn has in recent years provided significant competition.

World champions including Ricky Burns, Nathan Cleverly, Tony Bellew and Kell Brook were among those Warren established but who presently work with Hearn, perhaps largely because of the lure of fighting on Sky Sports.

BT Sport’s investment in the “multi-year” deal, however, will ensure Warren’s resources are the greatest they have been since the 37-year-old Hearn’s emergence.

Billy Joe Saunders, Terry Flanagan, Liam Smith and Paul Butler are among those Warren is working with, but he said: “We’ve got nearly 60 fighters on the books and we’re looking for the best talent.

“There are other fighters out there on other channels who may not be happy where they are. If they’re out of contract, they can come and have a chat with us.

“We are competitors, we’re in this business to deliver the best for our customers. That’s what this is about. I’ve got lots of names (of fighters) in mind.

“This gives boxers a choice. The mantra in their heads in their last few years is ‘You won’t get the exposure on BoxNation’. Now you’re boxing on BT — you’re going to get great exposure.

“We’re doing a minimum of 30 shows a year: that makes us the busiest promoters in Europe.”

Rumours of a potential deal between Warren and BT Sport — whose head Simon Green was once with BoxNation — have persisted in boxing circles for years.

Both Warren and BT Sport’s commercial director Josh Smith insisted they have only been in contact for a year though, before Smith revealed the “recent resurgence” in the sport’s popularity inspired the development.

“Simon was our CEO at BoxNation, and I’ve been pestering him,” said Warren, 64.

Smith added: “We watched an Arsenal game a year ago, and that’s where it all started. (Boxing’s increasing popularity) was absolutely vital. We’re looking for the overall health in a sport.

“There are more British than American champions; that recent resurgence is very much something that piqued our interest. Boxing’s right up there as one of the sports (that BT Sport customers) are interested in. ”