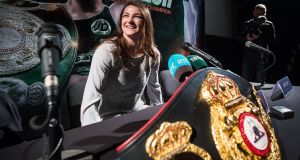 It was in 2007 that Katie Taylor won the first of her four Sportswoman of the Year awards, her sustained success since then making her a serious contender for the prize just about every subsequent year.

And a decade on she is still racking up the boxing honours, the latest her first world professional title after her victory over Argentina’s Anahi Sanchez in Cardiff last month.

While her admirers might still be adjusting to the sight of Taylor doing her work in the world of professional boxing, with all its accompanying hype and bluster, she has simply got on with the business of entering the ring and winning. In that sense little has changed.

It has been a remarkable spell for the 31-year-old from making her professional debut in November 2016 to collecting her WBA world lightweight title last month – from London to Manchester, New York to the Millennium Stadium, seven fights and seven wins. And with her first defence of her title scheduled for December, her 2017 work isn’t even done.

A unanimous points decision over Sanchez, scored 99-90 by all three judges, earned her the WBA belt, and after the fight Taylor talked of how much of a difference a year had made in her life following that crushing disappointment of Rio.

“This time last year I was definitely at the lowest point of my career, but I knew it wasn’t over for me. I knew it wasn’t the end. I knew the best was yet to come. I had to stay determined and not give up, and that’s exactly what I did.”

Her management is targeting March or April for her first professional bout on Irish soil, likely to be a title unification fight in Dublin, but turning Taylor into a star attraction in the lucrative American market remains the main goal.

And it was to the US that Taylor returned to resume training soon after winning her title – there were no lengthy celebrations. Her ambition is to be “the greatest of all time” so she is still putting in the hard graft and reckons she is not there yet.

More than a few would dispute that.

Previous monthly winners (awards run from December 2016 to November 2017, inclusive) December: Leanne Kiernan (Soccer). The Cavan teenager had an outstanding 12 months for Ireland at under-17 and under-19 level, before marking her debut for the senior team by scoring and collecting the Player of the Match award. She also helped Shelbourne to a league and cup double, scoring a hat-trick in the FAI Cup final, and won the FAI Young Player of the Year award.

February: Paula Fitzpatrick (Rugby). Fitzpatrick captained Ireland to victory in the opening four games of their Six Nations campaign. While August’s World Cup proved to be a disappointment for the team, Fitzpatrick had a pool game to remember against Japan, scoring two tries, the second sealing victory after Ireland had trailed 14-0.

March: Aoife Cassidy (Camogie). Playing alongside her sisters Eilis and Brona, Aoife Cassidy captained Derry club Slaughtneil, from a townland made up of just 350 homes, to their first All-Ireland Senior Camogie Club Championship and only the second ever for Ulster when they beat Galway’s Sarsfields at Croke Park.

April: Jessica Harrington (Horse Racing) and Chloe Magee (Badminton). Harrington completed the Triple Crown of Cheltenham’s great races, Sizing John winning the Gold Cup to add to her previous successes in the Champion Hurdle and Champion Chase. And then she won the Irish Grand National for the first time with Our Duke. Magee, meanwhile, became the first Irish woman to win a European Championship medal in badminton, partnering brother Sam to bronze in the mixed doubles in Denmark.

May: Leona Maguire (Golf). Even before she won the British Amateur Championship in June, Maguire had been added to our 2017 list after another superb season with Duke University that earned her multiple awards, including the Mark H McCormack Medal for the third year running, which is awarded to the top amateur golfer in the world.

June: Mona McSharry (Swimming). The Sligo teenager already had a summer to remember when she won two gold medals and a silver at June’s European Junior Championships in Israel, but then in August she headed for Indianapolis where she became the first Irish swimmer to win gold at the World Junior Championships. McSharry broke the national senior record in her 100m breaststroke victory, adding a bronze in the 50m breaststroke to her medal haul.

July: Gina Akpe-Moses (Athletics). At just 18, Akpe-Moses, who took up athletics when she joined Dundalk’s St Gerard’s Club at the age of seven, became Ireland’s first European women’s sprint title winner at under-20 to senior level when she won the 100m at the European Under-20 Championships in Italy. Now based in Birmingham, where she’s a member of Birchfield Harriers, her target is to represent Ireland at the Tokyo Olympics.

August: Katie-George Dunlevy and Eve McCrystal (Cycling). The pair have enjoyed yet another successful year, McCrystal taking the National Road Series and finishing as the highest placed Irish rider in the Rás na mBan, while Dunlevy had a rich time of it in World Cup events and at the National Championships with her other partner, Katharine Smyth. Together, though, they achieved their ultimate goal for 2017, winning double gold at the Para-cycling Road World Championships in South Africa.

September: Rena Buckley (Camogie) and Sinead Aherne (Gaelic Football). The pair captained their counties to All-Ireland success in September, Buckley (the camogie player of the year) winning her 18th All-Ireland medal in all when she led Cork to camogie victory over reigning champions Kilkenny, while Aherne (nominated for footballer of the year – the winner will be announced on Sunday) scored nine points in Dublin’s triumph over Mayo.