If winning tournaments is no longer humanly possible for him, well, what then? 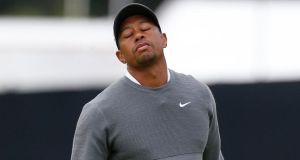 Tiger Woods reacts after missing a putt on day one of The Open Championship at St Andrews. He shot an opening 76. Photograph: Danny Lawso/PA .

The cruelty of golf knows no bounds. It makes the rarefied few who break into the top tier splendidly wealthy and feted in return for wearing staggeringly garish clothing and spending an inhumane amount of time in hotel rooms. But it exacts its price.

Golf’s brilliant deceit is that it makes its geniuses look ordinary. Golf’s superstars are built with neither the overwhelming athleticism of LeBron James or with the waith-like elusiveness of Lionel Messi.

A blonde, sun-kissed and slightly chubby American became the most prolific Major winner in the history of the game. John Daly, hard-living and hard- partying and overweight, showed up at this year’s British Open some 20 years after he claimed the Claret Jug sporting a blond bowl cut and a Howitzer drive which left people goggle-eyed.

Golf could accommodate the 6ft 5in George Archer, winner of the 1969 Masters along with the 5ft 4in Ian “Little Woosie” Woosnam, who was fitted for the green jacket at Augusta in 1991.

True, the portfolio of players also contained conspicuously athletic stars like Greg Norman and Nick Faldo. But golf accommodates such a wide variety of body shapes and types and ages on tour that everyone could find someone to relate to.

And then, in the mid 1990s, Tiger Woods strode through that field, first as a rumour and then as a vision: through the idyllic courses and the politesse and the Argyle sweaters, through the immaculate horticulture and vaguely Confederate whiff of segregation at Augusta, through the chumminess and through the history books as he notched up Major after Major with stony, magisterial ease.

There was a belief Woods could not only transform the image of golf but that he could actually make the game street. It wouldn’t have worked. Golf had no interest in being street. But his skin colour was the least of it. Woods ate up golf courses and played the game with such cold imperiousness that he made a joke of the notion he had competitors. For a few years the main tension of competitive golf lay between Woods’ pursuit of Nicklaus’s magnificent haul of 18 Majors titles.

That was why so many of his colleagues were clearly troubled by the sight of Woods floundering so hopelessly at St Andrews on Thursday. He wore a grey ensemble that matched the forlorn afternoon and even though he still looked the same, with the powerful, physique and the tidy, deliberate approach; he discovered once again that the omnipotence had left him. He is 39: the twilight year for any sportsman besides those in golf.

In golf, he is not old but he is still a generation removed from the Jordan Spieth and Rory McIlroy class who studied his brilliance as children and now want to eclipse it. One of the paradoxes of golf is it appears to be kind to its aging magi: it doesn’t require speed of foot or the ability to jump or run. So former Major winners can return to their Elysian Fields in their 60s and 70s and enjoy the novelty of playing in an elite tournament.

Occasionally, a veteran golfer might even strike an untapped vein of brilliance which can propel them to the top of the leaderboard decades after their prime, just as Tom Watson did at Turnberry six summers ago at the age of 59.

But is it really a kindness? To see Arnold Palmer teeing off at Augusta in recent years always brought to mind one of the most unflinching lines ever written by Philip Roth: “Old age is not a battle. It’s a f***ing massacre.”

On Thursday, Nick Faldo started his final British Open. In the 1980s and 90s, Faldo exuded power and menace and absolute conviction. After his first round, he acknowledged that person no longer exists. “I’m not even a part-time golfer any more. But I’m here with my boy and my family is here and my friends. The bottom line is I still did it 25 years ago.”

The Old Course reflected his modest appraisal, allowing him to shoot a desultory 11-over and leaving him last on the leaderboard. The place may be reeking of history but it has no time for yesterday’s men. Faldo is 57, still a young man and still in good shape.

What Faldo wanted was to feel the thrill of the big day one more time. There was something saddening about watching him merely getting around the course while just about avoiding disgrace.

At the same time, Woods was in a different place. Woods’ dilemma was of a more acute and public nature. The long putt at the second hole looked so good that Woods had the fist clenched ready to see it drop only to look crestfallen as it danced around the cup and spun away. On it went – lame drives, missed putts; that novice’s clunky chip shot at the 12th which fell mockingly short of the flag.

It is seven years now since Woods last won a Major. The age of golfers winning major tournaments in their 40s may be over. The competition is too keen, too fit and cut-throat. That was why Woods cut such a desperately lonely figure on Thursday. If winning tournaments and dominating the field is no longer humanly possible for him, well, what then? Where does he go from here?

Woods has never been an ordinary golfer. It is okay even for a figure like Faldo, who spent a 97 weeks at number one, to accept mediocrity and the consolations of a bottle of single malt at the end of his golfing life. But it would be an altogether more troubling sight –for all of golf – if Woods is caught in some netherworld in which his latest attempt to recapture what – and who – he was only leaves further removed than ever.

What a place to be on Thursday, out on the Old Course with nowhere to hide and shaking his head as if to remind himself of the refrain which perhaps he alone now utters: I am Tiger Woods.

1 Munster earn bank holiday bonus in entertaining Thomond Park tussle
2 All in the Game: Klopp’s Amsterdam subs don’t go down well
3 Dan Martin keeping it day-to-day as Vuelta proves challenging for riders
4 Peter O’Mahony ready to battle his way back into Ireland’s backrow
5 Gibson-Park, Earls and Kelleher all in race to make Ireland’s French finale
Real news has value SUBSCRIBE
Here is your handy guide to sport on television this week