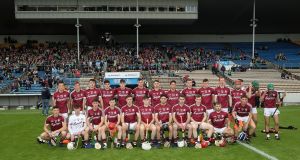 The Galway under-21 hurlers before this year’s All-Ireland semi-final.

Special Congress has voted to restructure the All-Ireland under-21 championship by reducing it to two provincial championships, Munster and Leinster, with Galway and the Ulster counties being admitted to the latter.

After a debate the move was passed with 72 per cent support from delegates. The proposal, motion 9 from Central Council was supported by Galway whose chair Michael Larkin argued that having no provincial championship was a major impediment for the county, which has been competing in Leinster at senior level for the past nine years.

“We enter this (under-21) competition at the semi-final stage and that’s very unfair to Galway. We’d like to be part of the Leinster championship and would ask for the support of delegates and ask Leinster to welcome us. We believe it would benefit Leinster and be good for Galway.”

Leinster counties, however, did not extend much of a welcome to the prospect of one of the strongest counties at the grade moving in with Wexford chair Derek Kent saying that he believed no counties in the province were in support.

GAA Director General Páraic Duffy intervened to say that the main purpose of the proposal was to address the difficulties of Ulster counties. Only last month, this year’s provincial champions Derry lost their All-Ireland to Kilkenny by 52 points.

“By defeating this we would be saying, ‘keep coming to semi-finals. Keep getting hammered. This is to give those counties a decent chance to compete at a provincial level. The average defeat of Ulster counties (at All-Ireland semi-final level) has been 23 points and we can’t stand over that.”

The one football motion was also successful. Jarlath Burns of the Standing Committee on the Playing Rules proposed to restrict the goalkeeper’s kick-out by requiring the ball to travel at least 13 metres and outside the 20-metre line.

“We’re trying to give a slight discouragement to the goalkeeper and make it slightly riskier to take a short kick-out and encourage him to kick the ball long which I think would be a positive development for the game,” said Burns.

There was opposition from Dublin delegate Michael Seavers.

The change was however backed by 82 per cent of the votes.