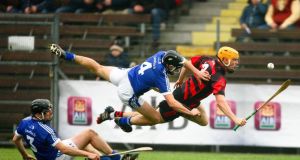 Cratloe 3-7 Ballygunner 1-10 Clare champions Cratloe left wind-swept Walsh Park with a precious three-point victory in the opening round of the Munster club hurling championship. Powered by outstanding performances from their inter-county stars Conor Ryan, Podge Collins and Conor McGrath, Cratloe proved just too good for Ballygunner who were reduced to 14 players for the crucial final quarter.

Two opening quarter goals from former All-Star Conor McGrath put the dual side firmly in the ascendancy. McGrath’s first goal arrived as early as the seventh minute when Podge Collins cut through the heart of the Gunners’ defence, passing to Shane Gleeson who in turn placed the unmarked Conor McGrath to shoot low past Stephen O’Keeffe. On 13 minutes it was David Collins drawing the last defender before passing to McGrath who this time dinked a low shot past the advancing Gunners goalkeeper. Conor McGrath hit 2-2 in the opening half, helping his side to a 2-4 to 0-2 lead at half time.

Ballygunner, playing on home soil and with the breeze now behind them, roared back into the game in the third quarter, hitting 1-4 without reply to trail by just a point (2-4 to 1-6) after 42 minutes. With Pauric Mahoney and David O’Sullivan to the fore and Conor Power’s goal on 38 minutes the Gunners looked favourites to prevail.

Ballygunners’ revival, however, hit a stumbling block after 45 minutes when their inter-county forward Brian O’Sullivan received a second yellow card followed immediately by a red card, from referee Diarmuid Kirwan. The momentum was now decidedly back in favour of the Clare side and their flying half back Enda Boyce hit a crucial opening second-half point after 46 minutes. Ballygunner kept battling but just couldn’t get back to parity. Then on 52 minutes the influential Podge Collins won possession along the sideline and his crossfield delivery was superbly caught by Cathal McInerney on the 21 yard line. Despite losing his stick the Clare youngster displayed all his dual skills by kicking the ball to the corner of the net and putting his side five points up, 3-7 to 1-8, with just eight minutes remaining.