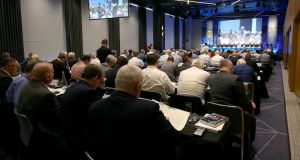 Expectation is the Tier 2 proposals and the rule changes will gain the necessary 60 per cent support at special congress in Cork. Photograph: Oisín Keniry/Inpho

One of the more curious modern conventions within GAA governance has been the emerging imperative for a presidential term of office to leave a “legacy”.

This has emerged over the past 20 years or so and is largely a reflection of the fact that a couple of nettles – rules on exclusion – had to be grasped over a few presidencies at the turn of the century.

Eventually the ban on northern security forces went in 2001 and four years later, Croke Park was opened for rugby and soccer matches.

With these obvious eyesores demolished, there hasn’t been as much requirement for historic decision-making but the expectation that presidents would do something so resonant that it would in a way define their tenure – as opposed to a simple three years of good leadership – has endured.

Into this tendentious landscape comes incumbent president John Horan whose chosen subject appears to be the Tier 2 football championship, a valid cause in an era when the gap between the bottom half of the game and the elite counties has been expanding.

The idea though has struggled to appear visionary rather than a technocratic exercise: I have a scheme rather than I have a dream. Accordingly, support for the idea has not prompted the flaming passions of other reforms.

Although not everyone is in agreement on this and one seasoned senior official reckons it’s too close to call and could easily be rejected with the bar set at 60 per cent for acceptance, it is expected to clear Saturday’s special congress in Cork’s Páirc Uí Chaoimh.

This is partly because presidential ‘big ideas’ tend to muster sufficient support.

So far counties have been sparing in their response to the idea and some of the bigger units, for whom Tier 2 is a notional prospect, are going to wait until the day before deciding so that they can gauge the reactions of counties more directly affected.

To date though, there are roughly twice as many counties in favour and no pattern of regionally-based opposition in any of the four provinces.

There have been objections from the player associations. Although 60 per cent of the GPA are in favour of such a championship, the inter-county players’ body has issues with the format, which doesn’t guarantee a county a more extensive fixtures schedule but simply substitutes a place in Tier 2 for a place in the current qualifiers.

They and the Club Players Association both also object to the introduction of another competition at a time when Croke Park’s Fixtures Calendar Review task force is concluding its deliberations.

Nickey Brennan, the former GAA president, who has a long history of involvement in the upper counsels of the association, is supportive of the concept but believes that it needs a guarantee of profile.

“Tier 2 is an important topic and credit to John Horan for grasping the nettle. The hurling structure with its five tiers has worked very well by providing meaningful championship activity and Croke Park finals. Does it deliver the profile that those teams would like? Probably not, but it has delivered the engagement of the players.

“In football, two-thirds of teams have no chance of winning the All-Ireland and so a tiered championship should be attractive. I think the final ought to be played as a curtain-raiser on All-Ireland final day.

“I know there would be a problem with tickets, as the counties would be looking for more than the minor counties get at present but if the championship is to be guaranteed its profile that’s the time to have the final.

“I also think with minor reduced in age to under-17, which is regarded as a development grade, it’s time to take it away from the pressures of All-Ireland finals, which is unreasonable for 16-year olds – to be deemed a success or failure at that age.

“The same should be done with the Joe McDonagh Cup (hurling’s Tier 2) even though it would disconnect the finalists from the Liam MacCarthy Cup.

“I don’t think that’s any harm although I accept that it’s not a good year to be making the argument after Laois beat Dublin but by and large McDonagh Cup winners go from the high of winning their championship to sustaining quite heavy defeats a week later.”

Opinion is divided on the idea of staging Tier 2 finals as part of All-Ireland final days but there is support for it in some form.

Paul Earley was an influential member of the late Eugene McGee’s Football Review Committee, which introduced the black card for cynical fouling and in its second report also proposed radical change to the provincial championships.

He feels that a Tier 2 final could take place on the Saturday evening of an All-Ireland weekend to create a festival of football – like hurling now does with both of the MacCarthy Cup semi-finals on the same weekend.

On the subject of the special congress’s other business, the rule changes, which were trialled during this year’s national league – sin bin, 20m kick-out and forward mark – Earley has mixed views.

“I don’t think it’s fair without a stop clock but number one, I don’t think 10 minutes’ punishment for a blatant, cynical foul is appropriate. It’s not fair because it won’t be the same for everyone, as a sin bin should be based on the time a ball is in play and not on time including stoppages.”

On the kick-out, he’d prefer to see a requirement that all had to cross the 45-metre line but welcomes that, under the proposal, short kick-outs will be slightly more difficult to execute and will create more contests for the ball.

“I’m not sure about the forward mark. There will be more kicking but the trade-off is the ball will be slowed down in the forward line.”

Expectation is however that all three rule changes will secure the 60 per cent necessary for adoption.

1. To introduce a Tier 2 football championship, contested between counties from Division Three and Four of the league once they have been eliminated from the provincial championship. Exceptions will be any counties that reach their provincial finals and from next year, the holders of the Tier 2 championship.

2. A clarifying motion will determine the composition of Division Three – either those counties who played in it that year or to exclude those promoted and include those relegated from Division Two.

3. Providing an attacking mark, allowing a free kick for a player who catches a kicked pass that travels at least 20 metres within the opposition 45.

4. Changes the black card punishment from immediate replacement for the offending player to a 10-minute sin bin with no substitution.