‘Machine-like’ Donnchadh Walsh calls it a day for Kerry 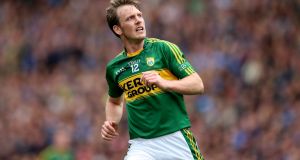 Donnchadh Walsh has played his last game for the Kingdom. Photograph: Cathal Noonan/Inpho

Donnchadh Walsh has announced his intercounty retirement after 15 years with the Kerry seniors.

Since joining the panel in 2003 - he made his championship debut in 2008 - he has accumulated three All-Irelands, eight Munster titles, two league titles and in 2015 he was awarded an All Star.

The template for a modern wing forward, outgoing Kerry manager Éamonn Fitzmaurice has described Walsh as “a genuine, honest and intelligent person and was a joy to be involved with on and off the field.

“In my time in charge Donnchadh was our specialist wing forward, always a demanding and dynamic role but in today’s game achieving the balance between working hard for the team while maintaining an offensive threat is a unique skillset. Donnchadh’s machine-like stamina was a huge asset and he moulded his game to allow him to use it to his and the team’s advantage.

“Once the ball was thrown in Donnchadh was in perpetual motion, always available as an outlet and his honesty when working for the team was exemplary. He was pivotal to our game-plan in 2014 where all these characteristics were in plain sight. I particularly enjoyed witnessing Donnchadh develop from a quiet personality who went about his business into a leader that drove the standards of the group, leading by example.

“His personal mantra of “next ball” became a habit for the entire group. The respect within the group for him was absolute and was matched only by the acceptance that marking him in training meant a serious test lay ahead.”

The 34 year-old Cromane clubman announced his retirement on Friday and wished the Kerry team the best for the 2019 season and beyond as they aim “to do what it takes to get Kerry back to the top.”

“For the last 15 years, I have devoted my life to the Kerry senior football team. I first played for Kerry as a minor two days after my 17th birthday back in 2001, and apart from a brief period where I had to knuckle down in my early 20s, I have been on the juggernaut that is the life of a Kerry footballer ever since. I cherished every second because it’s all I ever wanted to do. But now, it’s time for me to step aside.”