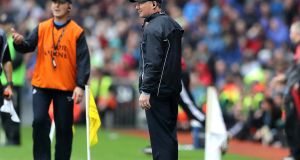 If the door is left open then it isn’t theft, and Dublin may feel that way about letting Mayo back into a game they appeared to have locked up just in the nick of time.

Considering Dublin actually found themselves in that position after thieving a couple of goals of their own, there can’t be any complaints. That’s how Jim Gavin feels about it: just because Dublin were in a winning position doesn’t mean they deserved to win.

What ultimately left them inseparable might well have been opposite forces attracting: Dublin glimpsing history and stalling on their first back-to-back football All-Ireland since 1976-77; Mayo determined not to let slip their chance to win a first All-Ireland since 1951.

What is certain is that Dublin were in that winning position, three points up as the clock began to spill into the seven minutes of overtime: where exactly referee Conor Lane got those seven minutes is open to interpretation (there were 11 substitutions, for starters), although for Gavin, there was no arguing with the result.

“Obviously that first quarter of the second-half, they came strong at us. But our guys showed great mental resolve to hang in there and push on again. We pushed on, went three points up but Mayo are a really good side. But I think over the expanse of the full 70 minutes, we just didn’t perform to our standards, so we didn’t deserve to win.”

It’s not the first time Gavin repeats that line about not deserving to win, although he’s not about to point any fingers of blame: the black card shown to defender James McCarthy after 25 minutes was harsh in his view but other than that Dublin’s problems were entirely their own doing: factor in the two first-half goals they were essentially gifted, and the luck certainly balanced itself out.

“I suppose when you look at why the black card was brought in, it was for cynical play, for blocks, pull-downs or trips,” he says of the McCarthy incident with Mayo’s Cillian O’Connor. “I don’t think it fits into that category. But from the referee’s performance, we’re just looking for consistency. That certainly wasn’t out there today.

“If James got a black card for that particular shoulder, there was definitely other ones on the opposition side. So I think from the both camp’s perspective, we just want consistency.

Gavin’s disappointment rests on Dublin’s own poor scoring return, only six points from play, and none at all until 33 minutes into the first half, from replacement Paddy Andrews.

“That certainly isn’t good enough to win an All-Ireland title, getting that much from play. And some of our shot selection could’ve been better. Execution on a wet day you might put in as a factor but I wouldn’t lean on it too heavy. So to come away, to be still in the competition hitting six from play, you’re happy.

“There were a lot of turnovers, and they got a lot of scores from that. So that’s something that we’ll definitely look at. We’ll take an awful lot from that game. We’ll reassess and we’ll go at it again.”

Gavin had no issue with the seven minutes of additional time, although felt perhaps the GAA might be better-served by having extra-time on big day finals such as this, rather than dragging the season out for another two weeks.

“Well, I’m just happy to be in the competition whether that was an opportunity to play another 15 minutes aside, or turn up here again in two week. And ve’ve been here before in this situation [drawing with Mayo in the semi-final last year] and we’ve learned from it. They want to perform, and they’ll relish the challenge.”