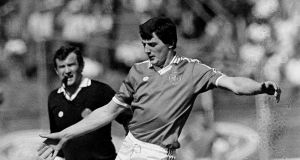 Cavan’s Stephen King during a match against Meath in 1987. Photograph: Ray McManus/ Sportsfile

When Cavan last won the Ulster title before this year, Stephen King captained the county to victory over Derry in the provincial final, and when Cavan last met Dublin in a senior semi-final he was also playing during a distinguished 18-year career that made him one of the top centre-fielders in the game.

It was in April 1989 and the counties met in that year’s NFL semi-finals. It was shaping up as a big year for Dublin, who would dislodge Meath from the Leinster championship the following July, and yet Cavan were intensely competitive that day in Croke Park.

King remembers it clearly. Cavan had just been promoted to Division One and progressed to the semi-finals. Dublin were sluggish all afternoon, but Barney Rock’s frees helped to get them over the line, 1-10 to 1-9.

“Yeah, yeah. They nudged us out by a point and we were five ahead at half time,” he says. “They caught us at the death when we’d been full value for a win. There was a massive Cavan crowd – we’d beaten Derry in the quarter-final – and we were going really well, but as the cliché goes, the rest is history. Another one that got away!”

He is hopeful and even confident that Cavan can also compete this weekend if they show the nerve and application they exhibited in the Ulster final when staying toe-to-toe with Donegal.

He refers back to Cavan’s history of being able to compete with some of the best teams in Ulster even when they had no realistic prospects.

“We’d a very bad run in the championship but in 1992, the year when Donegal won the All-Ireland, Cavan played them in the Ulster quarter-final. The first day in Breffni Park was a draw and we got well beaten in the replay. Now we could have – and should have – won the first day but if we had there was no chance we were going to go on and win the All-Ireland but we might have stopped Donegal.”

They did stop Donegal this year at a time when Declan Bonner’s team were considered likely to be a formidable obstacle for Dublin had they made this Saturday’s All-Ireland semi-final.

Cavan have had to bounce back from an unlucky relegation in October to embark on a championship run of death-defying comebacks against Monaghan (seven points) and Down (10 points).

King has been impressed by his county’s resilience in manager Mickey Graham’s second year and also by the more adventurous and traditional style of play.

“To me they’re playing really great attacking football. For years we were defensive and passing the ball backwards even when the likes of Donegal and Tyrone, who were the instigators of that style, were rethinking it. They had moved on.

“Finally we did too. Mickey Graham was a forward and he knows what it’s like to be starved of the ball. We’ve a lot of players who have scored, and since Mickey took over Cavan have been getting the ball into the danger zone a lot more often and a lot more quickly.”

The irony of this championship has been that whereas historic winners and notable victories have popped up throughout, no supporters have been able to attend and King reckons that this has been an advantage for Cavan and the other underdogs

“I think it helped Cavan not having crowds. I haven’t said that too loudly, mind you! Donegal have been in nine of the past 10 Ulster finals so a crowd wouldn’t have made much difference to them, but we have a young panel so it was less nerves for them, I’d imagine.

“They’re going out like in challenge matches – and I’m not being dismissive of them – but there’s nobody there, and no pressure of being watched. There is pressure when 30,000 are shouting their heads off at you, and Cavan haven’t had to deal with that. The Dublins and Donegals they can deal with, and they’re used to it.”

The need for a sudden-death format to expedite the schedules appears to have sharpened the appetite for ambushes now that the surprised are unable this year to be waiting around the next corner for their upstart conquerors.

King believes that whereas the qualifiers are a good idea in theory, allowing teams a second chance, their emphasis is misplaced.

“When you’re knocked out you go into what’s called the All-Ireland qualifier. The hint is in the name, but many counties aren’t within an ass’s roar of winning an All-Ireland, and if there was a back door within the province that’s a more open competition.

“There have been four different winners of Ulster in the past six years, and in Connacht until this year Mayo hadn’t won it for the last five years. If you got a second chance in your province it would mean more. Even to get to the final would mean something for some of the weaker counties.

“Ulster Council use to always run the championship with one game every weekend but this year they were running two, which makes it easier to organise a back door. It would be very workable if the beaten teams played off the following weekend.

“All the current qualifiers do is to hold up county championships to cater for something that the great majority of counties will never win.

“It was great this year that every county player was available to his club before making himself available to for the county. The condensed season has surely opened the eyes of the GAA.”