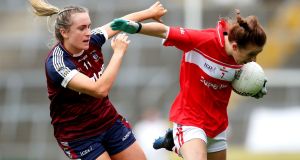 Libby Coppinger was the standout performer as the 2016 All-Ireland Ladies Football champions Cork moved one step closer to another decider with a big win over Westmeath at the Gaelic Grounds in Limerick.

This victory sets up a semi-final clash with reigning Ulster champions Donegal, and the Munster holders will be determined to move on after last year’s disappointing semi-final exit at the hands of Mayo.

Cork were already 3-5 to 0-3 ahead at half-time and the game was over as a contest. Coppinger, Eimear Scally and Áine O’Sullivan blasted goals for Ephie Fitzgerald’s side.

Leanne Slevin was a standout performer for the beaten Leinster finalists in the opening half but they were overwhelmed by their opponents.

Doireann O’Sullivan scored a fourth goal for Cork on the resumption, and the other goals came courtesy of Saoirse Noonan, Eimear Scally, Ciara O’Sullivan meaning Cork have now hit the net 23 times in five championship games this year.

Cork made a powerful start and after 37 seconds Coppinger had the ball in Karen Walsh’s net, following a pass from Ciara O’Sullivan.

Cork continued to pile on the pressure and they looked like a side aiming for bigger things this year. Their work-rate was immense and at times they only had two players in the Westmeath half.

Westmeath finally scored their first point in the 19th minute when Slevin popped over a good effort but Coppinger cancelled that out straight away.

Stephen Maxwell’s side did score two more points before half-time, with Slevin (free) and Maud Annie Foley on target. But Finn scored her third point of the half to give her side a 3-5 to 0-3 advantage at the interval.

Doireann O’Sullivan scored first in the second half and her goal put Cork 14 points clear. Slevin hit back with her third point but there would be no comeback.

Noonan was introduced in the 38th minute and she scored 1-4. Her goal came with 15 minutes remaining. Scally scored her second goal soon after.

The seventh and eighth goals came via Ciara O’Sullivan, while Aoife Connolly managed a Westmeath consolation in between. Far too little too late however as the Rebelettes progress.

“Over the last 12 years Cork have been the best team in the country and they are probably back to their best now. Dublin had the All-Ireland win last year but Cork are absolutely flying it, and I don’t envy Donegal trying to do what we had to today.”