Daniel Kearney undaunted as he sets high targets for Cork 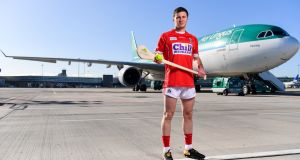 Daniel Kearney at Dublin Airport helping to launch the Aer Lingus-sponsored Fenway Hurling Classic. “The ultimate goal is the All-Ireland every year but it’s important for the All-Ireland not to be the only metric of success.” Photograph: Sam Barnes/Sportsfile

It was another ultimately disappointing summer for the Cork hurlers.

For the third time in five years, they won the Munster title and lost the subsequent All-Ireland semi-final. The team that beat them, Limerick, overcame a six-point deficit in the closing 10 minutes and went on to win the All-Ireland.

There were positive aspects along the way, such as the form of Daniel Kearney. The Sarsfields player made his starting debut in 2013, under Jimmy Barry-Murphy, and was a first-choice centrefielder all the way to the epic, replayed All-Ireland final against ultimate winners Clare. But in recent years he had slipped back to being a bench option.

This season though, he took up residency at wing forward and over a gruelling campaign his energy, work-rate and sharpness were a stand-out package for Cork and he goes into the awards season with a second All Star nomination and all to play for.

“I’m not the stereotypical wing-forward,” he said at Thursday’s launch of the Aer Lingus sponsorship of November’s Fenway Classic in Boston, which will feature Cork.

“Aerially I don’t have what you’d consider ball winning ability in the air from puck-outs but I suppose John put me to wing-forward this year and I just tried to do my own thing with it, tried to suit the team whatever way I could and it just worked.

“Where I get the benefit is that the lads inside are being marked so tight, Patrick [Horgan], Conor [Lehane], Alan [Cadogan] so some of the half-backs try to protect them and I can ask a better question then of the half-backs.

“I enjoy that element of almost poker. You just ask the question and sometimes I feel that teams are happy to leave me off and to protect inside and that then suits me grand. I’m thinking. ‘I’ll try to punish you then for – not a lack of respect of my ability – but if you’re not going to mark me then I’ll try to hurt you.

“I thought that worked well for us this year. I suppose there’s kind of evolution in the game coming the whole time. Definitely the last two or three years, the short puck-out where you’re trying to pull teams back up the pitch. Yeah, I enjoy bringing a different type of role.”

Aside from the variety of his game at wing forward, Kearney added to his scoring returns, finishing the championship with an average return of more than 0-2 per match. During the summer he explained that adding a couple of ounces to the weight of his hurley had benefited his shooting without compromising his ability to flick up breaking ball.

His value to the team was nowhere as much in evidence as in the memorable semi-final against Limerick when Kearney had run himself ragged by the hour mark and in his absence the wheels started to come off.

“It was fatigue and after 60 minutes my legs were gone to be honest. You aim to run yourself into the ground and I suppose I literally did it, probably the first time in a game. I would consider myself fit enough but my calves just cramped.

“At 60 there was no more in me and when it came to extra time the lads just said to me ‘Are you able to go again?’

“It’s very hard to say ‘no’ when they’re looking for you. I suppose I went to try and go again, probably being at 60 or 70 per cent. The tiredness kind of showed in extra-time with Limerick getting a draw and closing it out.”

Having been involved in four unsuccessful All-Ireland semi-finals (he appeared as a replacement in 2012), Kearney has got used to putting things in perspective.

“Yeah, I suppose the ultimate goal is the All-Ireland every year but it’s important for the All-Ireland not to be the only metric of success. Only one team can win and if you say there was only one team successful for the year, I don’t think that’s a proper lens to look at it.

“Is a Munster championship good enough? Ultimately from Cork perspective it’s not. The landscape is so competitive at the moment that I think you’ve got to look at other factors and a team’s performances throughout the year, not just, ‘did ye win the All-Ireland or not’.”

At the media launch with him is Podge Collins, who hurled on the Clare team that beat Cork in 2013. Kearney reminds everyone that in the five seasons since, they have yet to repeat the feat.

“I suppose that’s the beauty of sport. I was only talking to Podge out at the photo shots and he was giving out that we were beating them the last few years and I was going like, ‘well every time we come back into the dressing room after beating ye we’re like, have we made up for it yet?’ And we still say no’.

“Those last two All-Ireland semi-finals, we just weren’t clinical on both of the days in terms of discipline against Waterford with the red card and the last day with closing out the game against Limerick. Those are areas that we need to improve on if we’re to get to the ultimate goal.”

So he’s not tormented by setbacks?

“If you were tormented by moments like that you’d never play sport to be honest. Losing and disappointment is 60 or 70 per cent of sport because you ultimately have one winner at the end of the day.”