Ulster Bank is inviting prospective first-time buyers to a free informative event in October with hints and tips about finding the right home in Cork, where there are an estimated 50 new developments to choose from 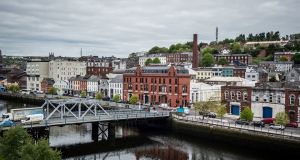 Cork is of particular interest to home buyers right now with a record number of new schemes either on or coming on the market. Photograph: Getty Images

On Thursday, October 10th, The Irish Times will host a first-time buyers’ event in association with Ulster Bank in The River Lee Hotel, Cork, designed to help buyers in Cork city and county to get on the housing ladder.

As well as the chance to meet Ulster Bank mortgage specialists face-to-face, attendees will hear from a panel of speakers including architect Peter Crowley of award-winning practice PAC Studio, and a judge on RTÉ’s Home of The Year.

Peter will highlight what to look out for when going to view houses, the questions to ask and pitfalls to avoid.

Angela Keegan, managing director of property website MyHome.ie, will provide real insight into the property sector this year and beyond; while Cork native Brendan Healy, manager of Ulster Bank’s Patrick’s Street branch, will offer tips about the mortgage application process to make sure you don’t fall prey to unnecessary delays.

Interiors and DIY blogger Katrina Carroll of @vintageirishkat will show you how to put a unique stamp on your new home with the most modest of budgets.

To attend the event in Cork for first-time buyers on October 10th, register your interest here.

Cork is of particular interest to home buyers right now with a record number of new schemes either on or coming on the market.

For first-time buyers looking at a good range of affordable options, the city represents something of a safe harbour, which is fitting, given that Statio Bene Fide Carinis – a safe harbour for ships – is the motto on its coat of arms. It’s also the second largest natural harbour in the world, after Sydney.

Cork city centre is an atmospheric destination which, while being home to all the big retail names, teems with unique and quirky independent retailers too, including its famed English Market.

“Cork city has lots of individual sole traders, very nice restaurants and bars, and has moved to being much more an experience- driven, rather than retail high street-driven, city,” says Paul Hannon, of Sherry Fitz in Cork. “It’s got sights such as Shandon Bells and St Finbar’s Cathedral, and lovely places to visit, like Cobh and Kinsale.”

Part of what makes the city centre so vibrant is the fact that it’s a university town, with academic institutions covering everything from fashion to pharmabiotics. It has a student population of 35,000, giving it one of the youngest population densities in the country. In 2015, Unesco awarded Cork one of its inaugural Learning City Awards.

It has a number of major employers too, spanning a variety of industries, including Apple, Heineken and Dulux.

“We are seeing significant levels of new investment in the city. The Government’s Project Ireland 2040 plan sees Cork as a major centre for significant population and jobs growth, and on the back of that we are seeing significant developments of offices, hotels and student accommodation. Some 10,000 new jobs are expected to be created in the city centre over the next number of years and not all will be filled by the local population, so we are seeing a lot of people from all around the country, and from other countries, moving to Cork,” says Conor Healy, chief executive of Cork Chamber of Commerce.

The feedback the Chamber gets from Cork’s new arrivals is overwhelmingly positive. “It is seen as a really good base for strong and diverse career opportunities, with a strong ‘livability’ factor in relation to family and work-life balance. That’s combined with being a relatively compact city that has a strong festival and food culture, and where residential costs are significantly lower than Dublin.”

Around 60 per cent of city workers enjoy a commute of less than half an hour. “Leave at 7am and you’ll be in work by 20 past,” says Healy.

“We’re also seeing far more people walking and cycling to work, as well as a significant uplift in the number of people using public transport, as we have seen improvements in the bus and suburban rail services.”

Rail services to the city make it a particularly viable option for those living in Midleton, Cobh and Mallow. The Cork Metropolitan Area Transport Strategy, a multi-billion transport initiative, will see transport services enhanced over the next two decades.

In Carrigaline, you’re just a five-minute commute from Ringaskiddy, points out Dan Howard, the auctioneer handling sales at Janeville. “There are major employers there offering well paid, high-end jobs,” he says.

Cork City native Paul Hannon, of Sherry Fitz in Cork, moved to Crosshaven, a 40-minute drive from the city centre, to enjoy its famed quality of life. The scenic village, which makes the most of the county’s extensive coastline, is home to the world’s oldest yacht club.

Sherry Fitz currently has 12 schemes under management in Cork, up from three two years ago. These include Ballinglanna in Glanmire, just four miles outside the city – and a 10-minute commute - where new homes cost from €290,000.

In fact, there are an estimated 50 new developments to choose from. These range from trader upper-type new-builds in city suburbs such as Blackrock, Douglas and Model Farm Road, to prime first-time buyer options in the commuter towns such as Cobh, where three-bedroom houses at Cooline are priced from €220,000.

Janeville, in Carrigaline, is the biggest housing development in the country, expected to top out at 1000 new homes when complete. Currently, a three-bedroom terraced house costs from €285,000.

East Cork has developments at Midleton and Ballintemple, while west Cork offers new homes in Clonakilty and Bandon.

According to MyHome.ie’s Property Report for Q2 of 2019, developed in association with Davy, the median asking price for a property in the county stood at €245,000 in Q2 of this year, up 4.3 per cent over the previous year.

“If you draw a circle around the city, you’ll see it has nice metropolitan towns and villages too, such as Carrigaline, Midleton and Ballincollig. They all offer an easy commute, with houses available. There’s choice for people in Cork,” says Hannon.

To attend the event in Cork for first-time buyers on October 10th, register your interest here.

Ulster Bank Ireland DAC is regulated by the Central Bank of Ireland.