There are nine Glens of Antrim bolstering Northern Ireland’s Causeway Coastal Route, each with its own personality 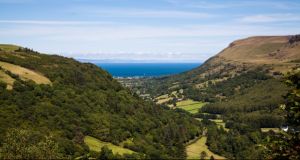 Glenariff: one of the nine Glens of Antrim that stretch out to the Causeway Coast

Time does not stand still in Northern Ireland. It is a region that blends centuries of history with a modern vision. Megalithic stacks dwarf 21st century fantasy film sets. An age-old welcome arrives with a side of superfood Rathlin kelp. Old milking parlours house blacksmith artists and bakehouses are also artisan showcases. Even the traditional Ulster breakfast has been given a make-over – it’s now a stack too but a precisely prepared one and certainly not intended for any giant.

“We are coming into our own in Northern Ireland,” says Caroline Redmond, of Irish Feast Food Tours. “We are finding our confidence, especially around the Causeway Coast. Our confidence in our area, our towns, our villages and in our produce.”

And rightly so: the Causeway region is world-renowned. Recently, along with Belfast, it ranked as the top region in the world to visit in 2018, by travel giant Lonely Planet. Spectacular seaside vistas neighbour emerald glens that can’t but impress any visitor from north, south, east or west of Ireland or further afield.

The Causeway Coastal Route is bolstered by nine deep glens, each with its own name and character, but collectively known as the Glens of Antrim. They are in a spectacular setting and each deserves a visit to explore the incredible landscape, dramatic walks and great views towards Scotland and nearby Rathlin Island that they offer.

A great stop on the coastal route north of Belfast is Glenarm Castle and Estate, home to the Viscount and Viscountess Dunluce and their family. It is a surprising foodie find in an area where there are plenty more. Here, apart from the estate itself, a must-visit is the old Mushroom House of Glenarm Castle, overlooking the kitchen garden. The blackboard in this seasonal tearoom features a simple choice of dishes, all championing local produce – seafood chowder; crab, harissa and prawn tagliatelle; and shorthorn beef burger. Back outside, explore the walled garden at the castle (open between May and September). In July the grounds are the site of the Highland Games and the Dalriada Festival – a celebration of sport, music and fine foods.

Further along the coast, Cushendun has been a landing place and ferry point between Scotland and Ireland since settlements began about 9,000 years ago. Long a conservation area, its proximity to Scotland’s Mull of Kintyre shows how strongly these two places were once connected.

Back inland, Glenariff Forest Park makes access to the Glens very straightforward, with marked trails and waterfall walks. With its three waterfalls, forest trails and incredible views of the coast it’s a wonderful starting point to all that the Glens of Antrim have to offer.

Nearby, traditional skills such as blacksmithing are also getting a new look and feel in the Glens. Hot Milk Forge is a blacksmithing school that runs day, evening and weekend courses. Artist blacksmith Eamonn Higgins set up the forge in 2015 and through his work he is rekindling the art in the region.  The forge is located in what was the milking parlour of Eamonn’s family farm in Martinstown, Glenravel. Eight workstations are crafted from scrap parts and metal that was unused on the farm. "Some people like to work with their hands and be creative,” he explains. “The majority of people who come along like the idea of making something like a dagger from Game of Thrones or equipment for their kitchens,” he says.

In nearby Ballymena, about seven miles from the Dark Hedges, the Scullion family set up the Scullion Hurls Economusee. The economusee project is designed to showcase traditional crafts and help artisans tell their story. Their workshop allows visitors to experience the traditional craft of hurl making – learning about the process, the family connections and the teams that use a Scullion hurl.

The Glens can be traversed on two waymarked footpaths: the Ulster Way sticks close to the sea, passing through all the coastal villages, while the 32km Moyle Way runs inland across the plateau from Glenariff Forest Park to Ballycastle.

Caroline Redmond bases her food tours on what she calls the WELL system - walk, eat, laugh and love.

Ballycastle is the base for one of Caroline Redmond’s most popular foodie walking tours. She bases her food tours on what she calls the WELL system - walk, eat, laugh and love. It’s here, at the Bay Café, that you can sample the Ulster fry stack - soda farl, potato bread, black pudding, sausage and scrambled egg served with cherry tomatoes cooked in pesto. All are the best of local produce.

A favourite stop-off in Ballycastle is independent bakehouse and café Ursa Minor. The bakery got up and running in 2004 through a crowdfunded Kickstarter campaign and uses seasonal ingredients, often foraged.

The bakehouse is also part of the economusee project, so you can book a tour or simply visit and follow the storyboards to find out more about their baking techniques.

From Ballycastle you can take the ferry out to Rathlin – where Redmond also runs a tour. Here she visits the retro Sarah’s Watershed Café for lunch or breakfast; the Kelp store known for its top quality seaweed product and environmentally-friendly approach; and McCuaig's Bar for a glass of Rathlin Red.

“There is something extra special about touring on Rathlin Island and visiting artisan producers from such a small community. I try to encourage people to stay overnight because that is really something special,” she says. Rathlin is six miles from Ballycastle and just 15 miles from the Mull of Kintyre. It’s home to thousands of sea birds and the landscape they inhabit makes it a wonderful place to tour on foot. Visitors can explore the coastline, its 70-meter high cliffs and the lighthouse among other highlights.

Back on the mainland, exploring on foot certainly gives a deeper appreciation of the landscape. Eimear Flanagan runs Away A ‘Wee’ Walk (awayaweewalk.com) tours along the causeway coast. “Our coastline is as spectacular as the Cliffs of Moher or Slieve League in Donegal,” she says.

For Flanagan, the showstopper is the 8-10 mile walk from the Carrick-a-Rede rope bridge to the Giant’s Causeway, the around 50-million-year-old pile of basalt columns that have inspired legends and wonder through centuries of Irish history. The visitor centre, which has had an £18.5 million make-over, opened in 1986. “The Giant’s Causeway attracts almost one million visitors a year and yet only a few hundred do this walk,” says Flanagan. She maintains that it is one of the most special ways to view both the coastline and the Giant’s Causeway. “The scenery is awe-inspiring and to then arrive at your end point – it’s a real wonder,” she says.

Not far from here is Ireland’s oldest working distillery at Bushmills. Take a tour of the Old Bushmills Distillery (bushmills.com/distillery) to get a behind-the-scenes look at whiskey production and sample a smooth dram for yourself.

To fully embrace the idea of slow tourism and explore the area at your own pace, check-in to the former gentleman’s manor, Galgorm Resort and Spa Galgorm (galgorm.com). It is a country house hotel set among lush pastures and riverside walks. There are three areas to dine at the hotel – enjoy fine dining at the three AA rosette-rated River Room restaurant which offers a local and seasonal menu; or a more casual experience at Gillies Grill or the all-Italian affair at Fratelli. Bed and breakfast at Galgorm Resort & Spa starts at £210.00 per room per night, and with current exchange rates your euro goes further .

It is not only the kitchen that champions local produce – in the Thermal Village, which was the first of its kind in Ireland when it was built, organic Voya treatments use seaweed farmed just up the road. The thermal village and spa, free to use for hotel guests, is a highlight of the hotel. Indoor and outdoor spa pools, saunas, ice rooms and cabins take advantage of the landscape. For the ultimate treat, have a glass of bubbles brought to you in your stunning log-fired hot tub, which are dotted along the riverside. From here, lie back and soak in the scenery that can only be found in Northern Ireland.

Getting there:
The Causeway Coast is the most northerly part of Northern Ireland. It can be reached from Dublin in just under three hours and is only an hour’s drive from Belfast.
For planning purposes, it’s useful to think of the Causeway Coastal Route as stretching from Belfast in the east to Derry-Londonderry in the west.
Plan and book your autumn short break at discovernorthernireland.com