Father and son, Colm and Cillian Barry, on 23 years in Pfizer, abrupt changes and technology's impact 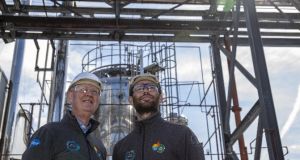 People who work in the same job for years often admit that their colleagues become like a second family. But what if you actually work with family? That’s the case for Colm and Cillian Barry, a father and son from Co Cork, who both work in Pfizer’s Little Island site.

The elder Barry is almost part of the furniture in the Cork site, having worked there as a process operator for 23 years. Last year, he was joined by his 28-year-old son Cillian who works as a day operator.

Colm has seen the Little Island site go through dramatic transformations, especially since it was taken over by Pfizer. “There is no comparison to how it used to be, it is just phenomenal. There has been huge investment through the years.”

Colm remembers a time before technology; “In 1996 in production we had just one computer, which was involved in just one step of a process – everything else was manual. Automation and technology have transformed the place.”

Cillian is part of a generation who can’t imagine working without technology, but he is keen to emphasise that there is much more to working at Pfizer than the technical side of things.

“At the end of the day this company is all about people. It’s never boring.” Colm agrees. “This is a fantastic place to work, with such a family atmosphere, everyone knows everybody else. You are involved on a day-to-day basis with everyone working on site. It’s an incredible place to work.”

Interestingly, both men came to Pfizer for their “second career”; Colm had previously worked as a draughtsman, or architectural technician, for more than 20 years, while Cillian wanted to leave the catering industry he had grown tired of.

“I came from a completely different field, and my working life has been split in two essentially. I am lucky that I loved both careers,” says Colm.

Cillian admits that it was a “complete 180” to shift from the food industry to the pharmaceutical industry, but noted that there are some similarities; “There are risks involved in both careers, while the restaurant is more short-term and this is more of a long-term vision, both require you to be very precise.”

Looking back, his father has been prepping him for a role in Pfizer his entire life.

“When I was a child I always asked my father questions about what he was doing at work. He would explain things to a point but would always make me go and find out the answer – he didn’t make it too easy on me.”

Colm is proud of his son for following in his footsteps. “Cillian was used to coming here growing up and I knew if he could get experience on this site, he could go anywhere.” Cillian agrees; “You get back as much as you give and if you want to move forward it’s there for you.”

For father and son, their status as work colleagues isn’t a permanent one

The easy banter of father and son is obvious, with plenty of good-natured ribbing, and Cillian admits that it continues in the workplace; “There is a camaraderie there with everyone, and we do get slagged but it’s all part of the fun of working on site,” Cillian laughs, admitting that his nickname on site is (inevitably) “Junior”.

For father and son, their status as work colleagues isn’t a permanent one – while Cillian is at the beginning of his Pfizer career, Colm is aware that he won’t be in Little Island forever. For now, their working relationship appears to be going smoothly, albeit with one caveat; “I don’t live at home anymore,” laughs Cillian. “I don’t think we could function as well as we do at work if that was the case.”