Prof Ruth Morrow and Trish Belford: combining the rough with the smooth

This is so much more than applying a covering to traditional concrete, inventors say 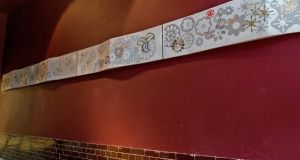 The Girli Concrete artwork in the entrance hall to the Playhouse theatre in Derry, which was created by Ruth Morrow and Trish Belford. Photograph: Martin McKeown

Imagine concrete wall with a velvet finish or a floor made of concrete but with the feel and texture of moss. “Concrete is usually perceived as being a cold, hard and harsh material, but it can have a much softer tactile surface,” says Trish Belford, a senior research fellow with Ulster University.

This is not simply a question of applying a covering to traditional concrete – the textile is actually an integral part of it with neither material dominating. It is highly innovative technology and has already been used on projects in Northern Ireland, Dubai, Cairo, Abu Dhabi and London. And the inventors – Trish Belford and Prof Ruth Morrow – are actively seeking commercial partners to scale it further.

Its origins go back to Belford’s roots in the textile industry in England where she had her own textile printing company, supplying textiles to designers such as Vivienne Westwood, Zandra Rhodes and Neisha Crosland. “This was all predigital and everything was screen printed,” she says. “Then digital printing came along in about 1999 and I had what I call a mid-life textile crisis. I felt like I was in charge of a photocopier, and not in charge of the people or the process any more. I was at home visiting my parents in Northern Ireland and they mentioned a research job in Ulster University and I moved back to take that.”

At about the same time, Morrow had moved back from Sheffield University to take up a position at Ulster as Ireland’s first woman professor of architecture.

“When I met Ruth, what was really interesting about her was that she didn’t view textiles as just a decoration on the surface,” says Belford. “She didn’t see it as a subservient product. She wanted to bring textiles into the material. We played about with the concept for the next year and a half – I always think really good innovation comes about through play.”

The initial work was with shop bought materials such as lace, which she explains has very good positive and negative states. In other words, the material and the holes are equally important features of the textile and that also applies when it is embedded in concrete. “The pattern the concrete makes is just as important as the textile – neither one is dominant,” Belford adds.

She had worked with velvet for many years in her textile business. “It’s a lot more complex than meets the eye. People thought we were just doing patterned concrete but that’s not the case – the textile and the concrete are part of a single material like a yin and yang. One of early pieces was flock concrete and we wanted to make the two surfaces completely integral. There is a mesh behind the concrete made of a specially woven fibre that the concrete flows through. We had to develop a new concrete mix for that.”

Under the guise of Girli Concrete, the duo won their first big commission in 2007 – a folded concrete frieze for the entrance to the new Derry Playhouse. “We didn’t realise how incredible it was at the time,” Belford notes. “It is really, really beautiful piece of work as first pieces often are. They were knocking down the old Playhouse and we went through it looking at the various architectural elements that we could incorporate into the design. It was a long, narrow dark entrance and we made a piece featuring embroidery with golden threads, weaving, flocking and concrete craftsmanship. It was more of an art piece really.”

Linen is another material that lends itself to this use. “Linen is fantastic,” says Belford. “We had to look for fibres which would survive the harsh alkaline environment and linen is the best. We also liked the idea of combining the indigenous industries of linen making and concrete manufacturing in one product.”

The end product was lovely but costly. “In the early days it was a very labour intensive and expensive three-stage process. It was beautiful but wasn’t ticking the sustainability and cost boxes. We worked with MYB Textiles in Scotland to create a one-stage weave that could be embedded in concrete.”

By that stage, Belford and Morrow had patented the technology and founded Tactility Factory to further commercialise it and four key processes for velvet concrete, crystal concrete, linen concrete and stitched concrete were developed.

The pair saw themselves primarily as academics and researchers, however, and Tactility Factory ceased trading in 2018 with Morrow moving to become professor of biological architecture at Newcastle University.

“We are still working together to use our expertise in textiles and architecture to explore and develop new material forms,” says Belford. “There is a lot of technology and knowledge already there and we would be very interested in working with partners on commercialising and scaling it.”