Inchydoney Island Lodge and Spa: From their families to yours

After a tough year, the team at Inchydoney can't wait to get the doors back open again. It’s what we are built to do 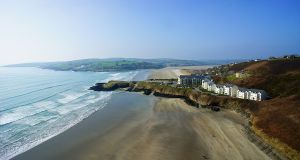 Inchydoney island, surrounded by sea on the coast of West Cork, just outside Clonakilty has been attracting holidaymakers for centuries.

This year has been unprecedentedly hard for tourism and hospitality businesses all over Ireland. For the team at Inchydoney Island Lodge and Spa, there was one very bright spot indeed.

“As soon as we closed in the first lockdown people started ringing and emailing us, just to reach out and get in touch and let us know they’d be booking when we reopened. We got great support and it was lovely,” recalls Des O’Dowd, the hotel’s owner.

By the time 2020 ends, the hotel will have been closed for 25 of 52 weeks, an astonishing situation no one could have foreseen.

Around 85 per cent of its guests are Irish and the vast majority are “either repeat visitors or people here on foot of a recommendation from a guest,” he explains.

That so many thought to make the hotel’s team feel better in a difficult time is fitting, given that a central driver of O’Dowd’s ethos as a hotelier is appreciation.

“I’d be very conscious that whenever someone comes to stay with us that they have to pass so many good hotels to get here, so we need to show our appreciation of that, and we do,” he says.

Inchydoney island, surrounded by sea on the coast of West Cork, just outside Clonakilty has been attracting holidaymakers for centuries.

In fact, though the current hotel only opened in 1998, there has been a hotel on the spot for over 100 years.

O’Dowd is something of an accidental hotelier. He started out as a chartered accountant but a stint working on the finance side of Kilkenny hotel Mount Juliet changed the course of his career, not to mention his life.

“I got the bug. I just loved the buzz of hotels,” he explains

So much so that, when he discovered a new hotel was being built right on Inchydoney beach, a stone’s throw from his childhood home near Bandon, he jumped at the chance to be involved.

Inchydoney is a special location ... we are blessed by where we are

It was built by local developer John Fleming. O’Dowd and Michael Knox-Johnston, former manager at Mount Juliet, took on the lease with an option to buy in 1998.

O’Dowd was just 31 and his wife, Ann, was pregnant with their first child. “I borrowed £30,000 from the bank by pretending I was building an extension to my house, even though the house wasn’t even one year old,” he says, still amazed he got it.

Of course, it didn’t go far, with a massive undertaking like a hotel but, by building a terrific team around him he made it work.

“There was myself, Michael, plus a head chef and two staff members from Mount Juliet and so, in our heads we were competing with Mount Juliet. Of course they didn’t even know we existed, but it was a great mentality to have starting out,” he recalls.

“If someone told me today they were going to do what we did, I’d say you’re crazy, but sometimes you need that youthful exuberance.”

Of one thing he was completely sure however, “Inchydoney is a special location. For us it was never about trying to make a quick buck, it was about polishing the jewel. We are blessed by where we are.”

He took over the hotel one month before it opened and recruited locally. Unlike hotel destination towns like Killarney, Galway or Kilkenny, he didn’t have an experienced talent pool to draw on. That turned out to be a blessing, he now says. By recruiting from the local area, including childhood friends, he has built up a close knit team all of whom are just as committed to the hotel as he is.

It’s the secret ingredient to its success. “The hotel took off pretty quickly.”

Today it employs 190 people, many of whom have been with him since day one.

“When I say we’re a family hotel, I don’t mean my family – Ann and our three daughters – I mean there are so many family members, husbands and wives, sisters and brothers, who work here,” he explains.

In total there are 30 families with more than one person represented on its staff, many from the immediate area.

General manager Catriona O’Keeffe and operations manager Julie McSweeney are sisters. Their father John was part of the construction team that built the hotel in 1998.

Sisters Mairead and Bríd O’Sullivan are its accommodation and spa manager.

The hotel’s head chef, Adam Medcalf is married to its duty manager, Helen.

“They came here as students - boyfriend and girlfriend - from Birmingham 13 years ago. Now they’re married and living locally and trying to help their kids with their Irish homework,” he laughs.

“Maintenance engineer Denis Dempsey was one of my best friends growing up, his wife Siobhan was one of Ann’s.”

Many of the businesses whose services are loved by guests are family run too, he points out, including Atlantic Whale and Wildlife Tours and Inchydoney Surf School.

When guests arrive at the hotel they receive a welcome drink of Five Farms, the world’s first ‘farm to table’ Irish crème liqueur. “One of the farms is Ann’s cousin’s,” he says.

He is conscious that all his suppliers are, like his own team, contending with a hugely challenging year.

“We’ll always try and promote the local guy and, being in West Cork, we are blessed with great suppliers, people like Caherbeg Pork and Ummera Smoked Products,” he says.

“But that goes for all the businesses in the area - the book shops, the bakeries. Much as we’d like to think that people come to Inchydoney just for our hotel, we know they really come because of all the fantastic things to do, the places to go and shops to visit in the surrounding area.”

We can’t wait to get the doors back open to guests. It’s what we are built to do

The hotel and spa receptions are open for those wishing to purchase Christmas Gift cards and the hotel is due to reopen to residents on December 27th, that date can’t come soon enough for his team, he reckons.

“The mood is positive, we’re seeing light at the end of the tunnel. We’ve had great support from Government and banks. We are conscious not every business will get through this and that we are lucky we are well resourced,” he explains.

“We’ve a good product, a good offering and a team that has shown great resilience. But we just can’t wait to get the doors back open to guests. It’s what we are built to do.”

From the Inchydoney family to yours, give a gift card and the simple joy of something to look forward to in 2021. For more see www.inchydoneyisland.com.