The massive infrastructure project aims to connect China with the rest of the world, by land and sea 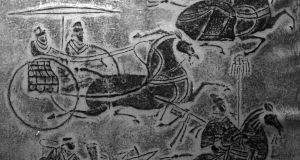 The term “Silk Road” in China comes from ancient efforts to expand trade routes with the outside world. Photograph: iStock

1. In autumn 2013, President Xi Jinping proposed the building of the Silk Road Economic Belt and the 21st Century Maritime Silk Road, later referred to as the Belt and Road Initiative.

2.The term “Silk Road” in China comes from ancient efforts to expand trade routes with the outside world, especially between mainland China and the vast western regions stretching from what is now called Central Asia, Western Asia, the Middle East and Europe. It was first established when the Han Dynasty (202 BC-8AD) facilitated trade with those regions in about 130BC, and lasted for more than 10 centuries and had a huge impact on commerce, culture and history.

5. The initiative will require new models of international co-operation and global governance. It aims to promote the connectivity of Asian, European and African continents and their seas, establishing and strengthening partnerships. This connectivity will help align the development strategies of many countries, tap market potential, promote investment and consumption, create jobs and enhance cultural exchanges.

6. As of July 2018, more than 100 countries and international organisations have signed the Belt and Road co-operation documents, extending the initiative’s scope from the Eurasian continent to Africa, Latin America, the Caribbean and the South Pacific region.

7. Over the past five years, China has signed 16 free trade agreements with 24 countries and regions, nearly half of which are countries along the Belt and Road. An example is Kenya’s Mombasa-Nairobi Standard Gauge Railway which has been completed and opened to traffic, and is promoting trade among east African countries as well as with the rest of the world. Other projects, including the Karachi-Peshawar highway in Pakistan, China-Laos railway and the Belgrade-Budapest railway are also under way.

8. There are 82 economic and trade co-operation zones, including successful China-Belarus Industrial Park and Egypt’s Suez Canal Economic Zone, which have created more than 244,000 jobs, bringing tangible benefits to local economic and social development.