Mapping the future: how will Ireland’s pension gap affect you? 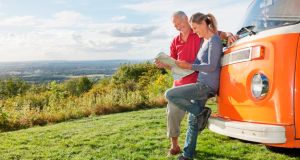 The size of the pension savings gap means the current generation of retirees – those due to retire between 2017 and 2057 - will have to save, on average, an additional €12,200 (gross) per annum

What standard of living do you expect in retirement? Do you want to be able to live the same kind of life you have been living while working? Maybe you expect retirement to be even better? More holidays, more weekends away, home renovations or perhaps upgrade your car?

If you haven’t thought about this yet, now might be a good time to do so. The pension gap in Ireland - that’s the amount people are currently saving compared to the income they will need to provide an adequate standard of living in retirement - is the second highest in Europe.

Analysis carried out by Aviva Ireland last year found that the pension gap in Ireland has increased by 38 per cent since 2010 compared to an increase of 6 per cent across Europe. To bridge that gap, Irish people would need to save an additional €27.8bn a year*.

No silver bullet
The size of the gap nationally means the current generation of retirees – those due to retire between 2017 and 2057 - will have to save, on average, an additional €12,200 (gross) per annum or €1,017 (gross) per month. This takes account of the State Pension but excludes tax relief on pension savings. Only the UK’s gap is higher at €13,200*.

Aimee Scriven, retirement solutions propositions manager at Aviva Ireland, says the size of the gap is being driven by a number of factors and there is no “silver bullet” to deal with the situation.

“People are still feeling the crunch from the financial crisis and are only now feeling they have the money to set aside for their retirement, something that they had come to regard as a luxury during the crisis. It’s not always at the forefront of people’s minds that they should invest money in their retirement,” she says.

Education is key
Mark Reilly, pensions sales manager with Aviva Ireland, says that education around pensions is key and  a specific personal finance module in the Civic Social and Political Education (CSPE) curriculum in secondary schools would help.

Reilly says the State Pension might provide an adequate retirement income for low income earners but those currently earning an average or larger income are unlikely to be able to maintain their standard of living without having saved for their retirement.

“It’s a personal thing. If you think about it, if €2,000 is hitting your bank account every month and that suddenly dropped to €950 a month, which is approximately what the State Pension will provide you with, what would you have to give up in your life to make up the shortfall? And would you want to give up those things?”

So what can be done to encourage people to start saving for retirement?

Scriven says an auto-enrolment scheme similar to one launched in the UK would be a great start. She also says that tax breaks “really help”. “Anything that can be done by the Government to encourage people to  contribute is going to help. As a pension provider, Aviva has done a lot to simplify our product range and to remove  some charges so that the money invested by our customers goes further,” she says.

Reilly says there is a perception that pensions are complex, but that they should be looked on as a long-term savings plan with tax benefits. “Once you get into the habit of saving for a pension, it becomes second nature.”

To find out if you have a gap in your pensions savings, see mindthepensiongap.ie/