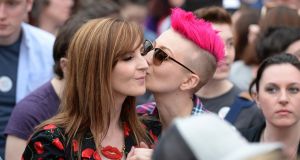 May 2015 brought the day that changed Ireland forever, he says, adding that the Marriage Equality referendum and its implications for a far wider acceptance of the concept of Diversity and Inclusion has had a strongly positive effect on the business sector. Photograph: Dara Mac Donaill / The Irish Times

Damien is the senior director for global customer support with Virtustream, a Cork-based cloud service provider and subsidiary of Dell Technologies.

“People talk about ‘Diversity’ and ‘Inclusion’ as if they’re the same thing — but they’re separate things,” he explains.

“At the same time you cannot have one of them without the other,” says O’Halloran, who is also a strong proponent of the role played by Employee Resource Groups in getting the D&I message across in the corporate workspace and in ensuring the conversation around Diversity and Inclusion continues in that space.

“They allow employees to be their authentic selves in the workplace. They help to create an environment that allows employees to bring their whole selves to the office. This might sound clichéd but it is actually very true.”

May 2015 brought the day that changed Ireland forever, he says, adding that the Marriage Equality referendum and its implications for a far wider acceptance of the concept of Diversity and Inclusion has had a strongly positive effect on the business sector:

“I think attitudes have evolved and companies have become more inclusive,” he explains. “Diversity and Inclusion is good for business, because diverse teams drive better outcomes,” he observes, pointing to a McKinsey report on diversity, which shows that diverse workforces are 35% more productive, while for every 10 per cent of gender balance achieved, company profitability rises by 3.5 per cent.”

“We’re on the right road. We’ve been making progress since 2015; there’s still progress to be made and it’s very important to continue the conversation. There is a change in mind-set as part of that historic referendum. Having people tell their personal stories helped change the culture, and it’s continuing to change for the better.”

Businesswoman Sarah O’Donnell has worked for many years in the corporate sector and has had a strong focus on diversity and inclusion. She recently qualified as an associate diversity coach and is seeking a full-time role in the area of diversity and inclusion. She says the focus on D&I in the Irish workplace has never been so heightened. She also advocates the appointment of dedicated Diversity and Inclusion officers within the corporate workspace to actively promote the concept.

“Many organisations have been driving accountability at senior management level and executives to implement a strong diversity and inclusion strategy and thereby create a far more inclusive workplace.

“There has been momentum on the issue and a lot more companies have become more active in implementing diversity and inclusion strategy.

“Many firms have become more transparent, both internally and externally in terms of what they are achieving,” she says, adding that a large number of firms publish diversity reports outlining their goals and listing their achievements in this area.

“Along with this, hiring practises of companies have evolved for the better over the last few years, in terms of looking for a diverse pool of employees and making the effort to be neutral and open in hiring practises.

“We have definitely come a long way but there is more to be done,” she says. adding that the important priority is to continue the conversation so that everyone realises that diversity and inclusion is an integral part of the workplace.

While many senior executives and employees have bought in to the proven benefits for staff in D&I, she says, in many cases middle management needs to be seen to be more supportive of the concept and more visible in terms of the diversity and inclusion work being done.

“Some have bought into it but others don’t see it as an integral part of how they should manage day to day business in the workplace.

“Time is a major factor, and additional resources should be directed at this area, to give middle managers the space and resources to do it.”

While some companies have special Employee Resource Groups who successfully drive the promotion of Diversity and Inclusion she says, many workplaces don’t necessarily have tailored resources aimed at promoting the concept. This means that in many companies it can be left to employees to promote the issue on top of their existing day to day responsibilities.

It’s important to have somebody who is responsible for this role, Sarah believes — and, she says, companies should consider appointing Diversity and Inclusion officers:

“If you don’t have someone whose sole focus is diversity and inclusion and who works in that space, it can be difficult to drive a company’s diversity and inclusion strategy, or accelerate it within the organisation. Companies need dedicated Diversity and Inclusion officers. If there’s nobody with that specific responsibility, it can be difficult to hold anyone responsible for lack of progress in driving initiatives,” believes O’Donnell.

Sarah O’Donnell is also currently actively involved in the organisation of a special Diversity and Inclusion conference, which is scheduled to be held in Cork on September 25 next.

The theme of this year’s conference, being run as part of Cork Pride festival, is “Is D&I in your DNA?”