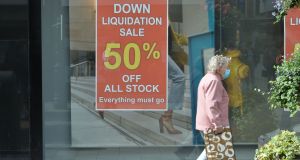 A shop on Dublin’s Henry Street closing down. Committed entrepreneurs are trying to hang onto old customers and attract new shoppers into their street shops during the pandemic. Photograph: Alan Betson

Footfall in Dublin’s city centre has witnessed a massive decrease over the past six months. Committed entrepreneurs are trying to hang onto old customers and attract new shoppers into their street shops. In order to keep their heads above a rising tide of challenges, they need to offer innovative incentives to get buyers over the shop thresholds.

Retail Ireland director Arnold Dillon understands the struggles of retailing in a global pandemic filled with restrictions, masks and hands-off shopping: “While some parts of the sector have bounced back, many retailers remain under enormous stress,” he says.

“City and town centre businesses are struggling because so many office workers are working from home. At the same time the trade from foreign tourists has evaporated. Footfall has dropped by as much as 50 per cent in some areas and the cost base of many businesses is way out of line with the trading reality.”

“Many retailers in Dublin are under huge pressure. Businesses in the city centre have seen a considerable chunk of their core customer base wiped out, with office workers and tourists all but disappearing over recent months,” says Dublin Chamber head of communications Graeme McQueen.

“The latter half of July and most of August saw a gradual increase in footfall numbers in the city centre. This was due to the success of pedestrianisation initiatives in the Grafton Street area and also campaigns such as the Make A Day of It promotion, which was rolled out by Dublin City Council. However, the introduction of fresh lockdown measures in late September has caused footfall numbers to regress once again. We're coming in to a crunch period for the retail sector in Dublin City. Even in a typical year, the Christmas period is hugely important for many retailers. For some, sales around Christmas can account for as much as 80% of their annual trade. So it's really important that the message gets out there that Dublin city remains open for business. We encourage people in Dublin to support local over the coming months.”

The situation offers niche retailers with unique product lines a marketing challenge: how to maintain a stream of income by staying focused on high-quality, desirable product lines.

Weirs jewellery of Grafton Street has been going for 150 years and it has been continuing to retail throughout the turmoil of the last few months. The store employs 100 people, so it requires a lot of management and planning.

Chris Andrews looks after the operation side of the business. “For July and August, we were trading at similar levels to last year for the same two months,” says Andrews. “During the Covid lockdown and for the month of June we were behind last year’s figures for the corresponding months. We had to reallocate resources within the business to deal with different demands both through the lockdown and since. Our online business has been coping with a huge increase in demand and during the lockdown we had to increase the numbers working on it remotely.”

This shift to online sales with a strong communications support from staff is a key factor in relating personally with individual customers.

“Engagement ring sales are up dramatically on last year,” says Andrews who notes that couples are sticking closer together than ever due to restricted options.

“Sales in watches are similar to last year – but anything tourist focused has been hit like Celtic jewellery, for example,” he adds.

“Covid has given us the opportunity to look at parts of the business that we had not focused on previously like improvements in fulfilment and the automation of processes so that we can get products to customers more efficiently. We launched Flexi Fi online in March to offer customers the opportunity to pay for items in different ways and over a longer period of time. We are also looking at building a virtual consultation platform into our website as we used FaceTime a lot during the lockdown to keep in touch with customers.”

Alison Cowzer, cofounder of East Coast Bakehouse, Ireland’s biggest biscuit manufacturers and one of the mentors in the TV series Dragons’ Den, also highlights the importance of supporting Irish labels during the coronavirus crisis. “We need to support Irish-based businesses and Irish employees,” she advises.

“The ‘Love Irish Food’ slogan reminds consumers to help our retailers to get through the next few months.” Cowzer also believes we should think buying Irish when we shop in order to keep people in viable employment and to help smaller food producers too.

“Cities have become homogenous with global flagship stores replicating themselves. People are not window shopping and discouraged from browsing in-store so there has to be the online experience too that inspires people to go into the city to shop. During lockdown the local businesses got an upswing especially the local hardware, the butchers and coffee shops – this was a positive fallout from shopping local. If we can keep up this support, then businesses will survive.”

Dillon admits it is going to be a tough few months ahead. “With the advice of not using public transport and making unnecessary journeys – a challenge for an awful lot of business is trying to survive. Christmas is going to be particularly tricky.”

All change in the retail model

Profound changes in lifestyles and consumer behaviour will change the face of retailing forever, according to KPMG retail and manufacturing lead Niall Savage. “Not much more than a half a century ago, grocery shopping meant walking into a store and handing a list to a shopkeeper,” he says. “They would pick the items out for you from a shelf behind the counter, pack them into bags and sometimes they even brought them to your car.”

He points out that many people argued that the model would never change, that people would never sacrifice those service levels for the supermarket experience where they had to do everything for themselves. “They were completely wrong,” he says. “There were some consumers that were initially reluctant to adopt the supermarket model, but the great majority enthusiastically embraced it.”

We are now seeing a similar inflection point occurring with the shift to online retailing. “Consumers have been reluctant to go online for a variety of reasons, but Covid-19 has changed all that,” Savage notes. “In the first six months of the pandemic the penetration of online retailing – accumulated over 20 years – has doubled.”

Indeed, the new environment for retailers created by the virus was highlighted in the KPMG Consumers and the new reality report published in June of this year. “Consumers will go to physical stores only when the price is right, when it is convenient and when it is safe to do so,” the report found. It indicated that one in five consumers now shop more for groceries in online stores and 35 per cent for non-grocery items.

More notable for the future, however, were the numbers of consumers who said their shopping habits had changed permanently. For grocery shopping, 50 per cent of them said the change was permanent with 45 per cent saying the same for non-grocery. The report gives a clear message that physical retail will need to offer consumers new reasons to purchase offline.

This behavioural shift is game-changing for the retail sector and the trend is likely only to go in one direction. What is being seen is an acceleration in trends which were already evident prior to the virus.

Savage has a stark message for retailers facing this new reality. “There is little doubt in these circumstances that the vast majority of retailers without some form of an online presence or delivery channel are unlikely to survive in the medium to long term,” he says. “There will be exceptions, niche players and luxury goods retailers for example, but for many businesses forced to close temporarily during the pandemic, the key question is not when they will reopen but how.

“In this new world, many will have to pay at least the same level of attention to their online presence as to their offline store. And for many Irish retailers, that may well involve moving into the virtual world for the first time.”

For retailers and brands looking to grow online, there are two strategic routes, Savage advises: launching and managing their own brand store and using existing marketplaces. Many successful retailers are carefully mixing both.

“The brand store is a retailer’s own online channel, integrated with existing offline operations,” he says. “This allows for greater engagement with existing loyal customers and more control of service levels. Crucially, it allows the retailer to provide a consistent experience and message to its customers. While they have many advantages, they can be expensive to set up, promote and maintain and may take time to launch.”

Many retailers are also enjoying the benefits of listing on existing marketplaces such as Amazon, eBay and Etsy. “They allow for an accelerated online market presence, a low initial outlay and access to established world-class operations. For many, these are the shopping malls of the future and are increasingly important for helping retailers trade at volume and for opening up international markets.”

There are other options for local retailers. “A click and collect service can and does work perfectly well for local stores, restaurants and retailers,” Savage points out. “This reduces the complexity and expense associated with ecommerce and puts order fulfilment back in the hands of the consumer.”

Retailers can also use online channels to remind customers of their commitment to local communities. This was one of the key trends identified in the KPMG report – a marked preference for local products where their spending has a noticeable impact on the local economy.

“Having a local offering can be a key differentiator for Irish retailers as they try to compete online,” says Savage. “We have already seen a number of Irish grocery and fashion retailers make that strategic shift to a more upmarket, locally sourced offering. This enables them to stand out from the crowd as well as meet the growing preference of modern consumers to shop local and spend their money with companies which have more than just profit as a purpose.”

That said, these retailers are also investing in their ecommerce offerings in order to meet that aspect of changed consumer behaviour. “The future of retail is moving online or at least to a blend of virtual and physical offerings and those that fail to embrace it may fail to survive,” Savage concludes.