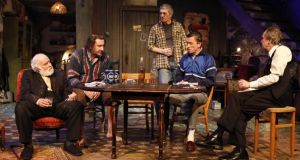 But for all the fractious brothers, feckless friends, love rivals and mysterious strangers, McPherson’s vision of damnation is more troubling. Hell is being alone.

A morality tale wrapped in a simple and compelling yarn, The Seafarer has a devilishly compelling conceit. A penitent alcoholic, Sharky, steeped in other sins, attempts to go dry while looking after his recently blind, cantankerous brother Richard. You don’t fancy Sharky’s chances. The house is so dismal that even the votive candle of a Sacred Heart portrait has given up the ghost. And then Satan arrives.

It is a story of damnation and redemption writ large, with Sharky’s soul wagered in a poker game, but the play’s more affecting moments are actually writ small.

“I’m after ruining Christmas for them all,” Richard’s blind-drunk accomplice Ivan says of his family, before softly adding, “Again.”

This co-production between the Lyric Theatre and the Perth Theatre, directed by Rachel O’Riordan, is attentive to the play’s desperate comedy and Faustian high stakes, but less sensitive to such subtleties, rendering its Northern Irish and Scottish premiere in quite broad stokes.

The approach is most conspicuous in Gary McCann’s set, a lofty structure of bare wood and beer posters, under Kevin Treacy ’s sunny lights, that suggests a crumbling pub rather than a poky home. With Louis Dempsey more animated and eager than Sharky’s shame would suggest, and much forced laughter between Ciaran McIntyre’s Richard and Sean O’Callaghan ’s Ivan, the play’s dramatic lineage from Synge through O’Casey becomes amplified into something perilously close to “stage Irishness”.

It takes a while for the production to achieve some balance, but Benny Young ’s Mr Lockhart, a Scottish Mephistopheles with a trace of Bela Lugosi ’s severity, introduces a sense of the otherworldly into this close-knit society. McPherson’s sympathy for the devil best combines his interest in naturalism and the supernatural, making Lockhart’s report of hell really one of alcoholic shame; of self-loathing “bigger and blacker and so much more boundless than you could ever have thought possible”.

It takes a creaky plot twist to turn the odds in Sharky’s favour, one that this production’s heavy emphasi s makes no less elegant, yet there’s still something touching about McPherson’s determined drive towards spiritual salvation.

Lockhart, bitterly removed from God’s love, bitterly complains of himself, “Isn’t that worth saving?” The production, like its protagonist, may lose its way sometimes, but it reminds you that nothing is beyond redemption.
Until March 23rd

1:47 Public transport to run at 80% and physical prison visits to end