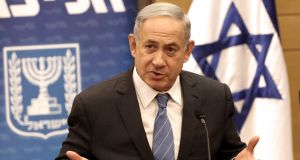 Israeli Prime Minister Benjamin Netanyahu talks during his Likud party meeting at the Knesset in Jerusalem on May 23rd, 2016. Photograph: AFP/Getty

‘Please don’t write about Ya’ir Golan!’ a friend begged me. “Anything a leftist like you writes will only harm him.” So I abstained for some weeks. But I cannot keep quiet any longer.

Gen Ya’ir Golan, deputy chief of staff of the Israeli army, made a speech on Holocaust Memorial Day. Wearing his uniform, he read a prepared, well-considered text that triggered an uproar which has not yet died down.

Dozens of articles have been published in its wake, some condemning him, some lauding him. It seems that nobody could stay indifferent.

The main sentence was: “If there is something that frightens me about the memories of the Holocaust, it is the knowledge of the awful processes which happened in Europe in general, and in Germany in particular, 70, 80, 90 years ago, and finding traces of them here in our midst, today, in 2016.”

All hell broke loose. Traces of Nazism in Israel? A resemblance between what the Nazis did to us with what we are doing to the Palestinians?

As a child I was an eyewitness to the last years of the Weimar Republic (so-called because its constitution was shaped in Weimar, the town of Goethe and Schiller). As a politically alert boy I witnessed the Nazi Machtergreifung (“taking power”) and the first six months of Nazi rule.

I know what Golan was speaking about. Though we belong to two different generations, we share the same background. Both our families come from small towns in western Germany. His father and I must have had a lot in common.

There is a strict moral commandment in Israel: nothing can be compared to the Holocaust. The Holocaust is unique. It happened to us, the Jews, because we are unique. (Religious Jews would add: “Because God has chosen us.”)

I have broken this commandment. Just before Golan was born, I published (in Hebrew) a book called The Swastika, in which I recounted my childhood memories and tried to draw conclusions from them. It was on the eve of the Eichmann trial, and I was shocked by the lack of knowledge about the Nazi era among young Israelis.

My book did not deal with the Holocaust, which took place when I was already living in Palestine, but with a question which troubled me throughout the years and which still does even today: how could it happen that Germany, perhaps the most cultured nation on Earth at the time, the homeland of Goethe, Beethoven and Kant, could democratically elect a raving psychopath such as Adolf Hitler as its leader?

The last chapter of the book was entitled It Can Happen Here! The title was drawn from a book by American novelist Sinclair Lewis, called ironically It Can’t Happen Here, in which he described a Nazi takeover of the US.

In this chapter I discussed the possibility of a Jewish Nazi-like party coming to power in Israel. My conclusion was that a Nazi party can come to power in any country on Earth, if the conditions are right. Yes, in Israel, too.

The book was largely ignored by the Israeli public, which at the time was overwhelmed by the storm of emotions evoked by the terrible disclosures of the Eichmann trial.

Now along comes Golan, an esteemed professional soldier, and says the same thing. And not as an improvised remark, but on an official occasion, wearing his general’s uniform, reading from a prepared, well thought-out text.

The storm broke out and has yet to pass.

No, the furious debate that broke out concerns the following questions: Is a high-ranking army officer allowed to voice an opinion about matters that concern the civilian establishment? And do so in army uniform? On an official occasion?

Should an army officer keep quiet about his political convictions? Or voice them only in closed sessions – or “relevant forums”, as a furious Binyamin Netanyahu phrased it?

Golan enjoys a very high degree of respect in the army. As deputy chief of staff he was until now almost certainly a candidate for chief of staff, when the incumbent leaves the office after the customary four years.

The fulfilment of this dream, which is shared by every general staff officer, is now very remote. In practice, Golan has sacrificed his further advancement in order to utter his warning and give it the widest possible resonance.

One can only respect such courage. I don’t believe I have ever met Golan and I don’t know his political views. But I do admire his act.

Somehow I recall an article published by the British magazine Punch before the first World War, when a group of junior army officers issued a statement opposing the government’s policy in Ireland. The magazine said that while disapproving of the opinion expressed by the mutinous officers, it took pride in the fact that such youthful officers were ready to sacrifice their careers for their convictions.

The Nazi march to power started in 1929, when a terrible worldwide economic crisis hit Germany. A tiny, ridiculous far-right party suddenly became a political force to be reckoned with.

From there it took it four years to become the largest party in the country and to take over power (though it still needed a coalition).

I saw my high-school teacher raising his arm when entering the class and saying, “Heil Hitler” for the first time (and then reassuring me in private that nothing had changed).

I was the only Jew in the entire gymnasium (high school.) When the hundreds of boys – all taller than I was – raised their arms to sing the Nazi anthem and I did not, they threatened to break my bones if it happened again. A few days later we left Germany for good.

Golan was accused of comparing Israel to Nazi Germany. Nothing of the sort. A careful reading of his text shows that he compared developments in Israel to the events that led to the disintegration of the Weimar Republic. And that is a valid comparison.

Things happening in Israel, especially since the last election, bear a frightening similarity to those events. True, the process is quite different. German fascism arose from the humiliation of surrender in the first World War, the occupation of the Ruhr by France and Belgium from 1923-25, the terrible economic crisis of 1929 and the misery of millions of unemployed.

Israel is victorious in its frequent military actions, we live comfortable lives. The dangers threatening us are of a quite different nature. They stem from our victories, not from our defeats.

Indeed, the differences between Israel today and Germany then are far greater than the similarities. But those similarities do exist, and the general was right to point them out.

The rain of racist Bills in the Knesset, those already adopted and those in the works, strongly resembles the laws adopted by the Reichstag in the early days of the Nazi regime. Some rabbis call for a boycott of Arab shops. Like then. The call “Death to the Arabs” (“Judah verrecke”?) is regularly heard at soccer matches.

A member of parliament has called for the separation between Jewish and Arab newborns in hospital. A chief rabbi has declared that Goyim (non-Jews) were created by God to serve the Jews.

Our ministers for education and culture are busy subduing the schools, theatre and arts to the extreme rightist line, something known in German as Gleichschaltung. The supreme court, the pride of Israel, is being relentlessly attacked by the minister of justice. The Gaza Strip is a huge ghetto.

Of course, no one in their right mind would even remotely compare Netanyahu to Hitler, but there are political parties here which do emit a strong fascist smell. The political riffraff peopling the present Netanyahu government could easily have found their place in the first Nazi government.

We are told that Golan is now protected by a personal bodyguard, something that has never happened to a general in the annals of Israel.

The general did not mention the occupation and the settlements, which are under army rule. However, he did mention the episode which occurred shortly before he gave this speech and which is still shaking Israel now: in occupied Hebron, under army rule, a soldier saw a seriously wounded Palestinian lying helplessly on the ground, approached him and killed him with a shot to the head.

The victim had tried to attack some soldiers with a knife, but did not constitute a threat to anyone any more. This was a clear contravention of army standing orders, and the soldier has been hauled before a court martial.

A cry went up around the country: the soldier is a hero! He should be decorated! Netanyahu called his father to assure him of his support.

Avigdor Lieberman entered the crowded courtroom in order to express his solidarity with the soldier. A few days later Netanyahu appointed Lieberman as minister for defence, the second most important office in Israel.

Before that, Golan received robust support from minister for defence Moshe Ya’alon and chief of staff Gadi Eisenkot. Probably this was the immediate reason for the kicking out of Ya’alon and the appointment of Lieberman in his place. It resembled a putsch.

It seems that Golan is not only a courageous officer, but a prophet too. The inclusion of Lieberman’s party in the government coalition confirms Golan’s blackest fears. This is another fatal blow to the Israeli democracy.

Am I condemned to witness the same process for the second time in my life?

Uri Avnery is a journalist and commentator

1 Trump directs team to co-operate on transition as Biden builds new administration
2 Exiting Level 5: Ministers to push for reopening of shops, restaurants and churches next week
3 How to gift your child a house deposit . . . tax free
4 Alison Curtis: My guilt at not going for a second pregnancy
5 BOI customers to be charged twice with bank fees on New Year’s Eve
Real news has value SUBSCRIBE