Una Mullally: Why ‘The Irish Times’ should not have published Nicholas Pell

We should not be interested in humouring fascism. We should be invested in destroying it 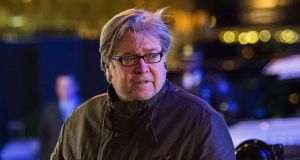 Steve Bannon, of the hateful online outlet Breitbart, will be in the White House. It will be the media’s role to challenge this new era, not treat it with such a light touch. Photograph: Getty Images

By now, you’ve probably seen the storm of negative reaction to The Irish Times publishing an article online under the headline: “The Alt-right movement: everything you need to know.”

What you actually need to know about the so-called “Alt-right movement” is that it is a cohort of pathetic but dangerous right-wingers trying – and often succeeding – in making their opinions more palatable to the mainstream over the past couple of years.

The Irish Times was wrong to publish the article by Nicholas Pell. There are of course many ways to talk about the so-called “Alt-right” – a purposefully fluffy term for white supremacists, fascists, Nazis and others – but publishing a racist, misogynistic, trolling glossary is not one of them. I do not believe we should be interested in humouring fascism. I believe we should be invested in destroying it.

When we discuss the rise of contemporary fascism, media outlets must be careful regarding giving that fascism an uncontested platform. Who is telling the story and what is their goal? The tone and approach the media takes regarding this subject needs to be extremely well thought out. As we’ve seen in the response to Pell’s article that people are rightly sensitive and averse to anything that seeks to normalise, glorify or sympathise with fascists, which is hardly surprising.

I am not going to repeat the terminology – in particular the appalling racism – that the writer used in his article. Cute-ifying obnoxious terms, acting “in the know” when the “know” is pathetic, vile and dangerous; normalising hatred directed towards anyone non-white and non-male, and demeaning those who dedicate time to fighting for equality and so on, is not informed debate. It is hateful. Fascism is not an aesthetic or a trend. We are not talking about craft beer or hemlines here. There is nothing fun, witty, or wry about fascism, misogyny or xenophobia.

Richard Spencer, a well-known Nazi who retweeted the Irish Times article, roared “Hail Trump, hail our people, hail victory,” to an audience of Nazi salutes at an event in Washington DC shortly after Donald Trump’s win. Spencer himself popularised the term “Alt-right”, which is probably why the media should think before using it. Fascism, white supremacy, and neo-Nazism are more accurate. Spencer has also said that America belongs to white men. That is the ideology of the so-called “Alt-right”.

Thanks to the mainstreaming of fascist and racist rhetoric, which has become increasingly amplified across Europe and America, there are plenty of racists who have been emboldened by both Brexit and Trump’s election. In England, one of them murdered Labour MP Jo Cox. In America, the stories of Muslims, Jews, and people of colour being harassed in the wake of Trump’s victory from school playgrounds to supposedly liberal neighbourhoods, are widespread. This is not cute. This is not a hairstyle. These things aren’t happening out of moustachioed “irony”.

The radicalisation of a cohort of white men who are turning to a brand of racism and fascism that is now being sold as a warped version of cool will inevitably end in the murder of those people these fascists don’t like. That’s how these things work. Europeans don’t need to be reminded of it. Nor do Americans who have the racist terrorism of lynchings in their recent past.

Should we debate this neo-fascism? Yes, if we are serious about ridding our world of it. Non-right wing people are constantly accused of living in echo chambers and lambasted for not “engaging” with people who think differently to them.

I am all for our opinions being challenged. The beliefs of those who hold equality to be an ideal, who oppose racism, who fight for the rights of the oppressed, who contest injustices in society have their views challenged every day, as neoliberal and conservative societies foster economic, racial, gender and other inequalities. Now that fascism has been mainstreamed and is becoming increasingly normalised, this is the real challenge.

Certain US media outlets have already been slammed after falling prey to fetishising white supremacists by focussing on their suits and hairstyles. We all need to cop on. Fascists have Steve Bannon of the hateful online outlet Breitbart in the White House. It will be the media’s role to challenge this new era, not treat it with such a light touch.

Meanwhile, the so called “Alt-right” – again, a rage-filled, whining, impossibly sensitive and overly-emotional cohort of white supremacists, racists, anti-women internet trolls, Nazis, conspiracy theorists, anti-Semites and more – is effectively trolling the media, contesting reality with fake news, writing off any kind of criticism as liberal whining, refusing to engage, harassing critics and adopting playground tactics to interviews so that when the words they say are presented back to them, they pretend never to have uttered them.

Having successfully mastered dog-whistle politics, the “Alt-right” has gained the confidence to drop euphemisms or insinuation and be outright bald in its beliefs. It thinks it has the upper hand, that its idiotic and circular debating techniques are smart, that it can say something and call “irony” or “humour” as a defence. But it is transparent and cringingly juvenile. And it is also dangerous.

Newspapers are boisterous places, with plenty of opinionated people who love nothing more than debating the issues of the day. All of us can construct arguments as to why something should or should not be published, but I believe articles such as the “Alt-right glossary” trivialise what is dangerously and deadly serious. Emboldening fascists and their sympathisers is the last thing we need right now.