The jailing of water protesters: intimidation at the heart of the matter 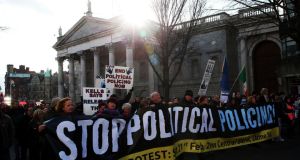 ‘Anyone listening to some of the media coverage and political rhetoric in the last week would be forgiven for thinking that the courts have been imprisoning people for protesting against water charges and water metering. This is simply not the case.’ Above, protesters march from Central Bank, Dublin, to Mountjoy Prison on February 21st, over the imprisonment of water charges demonstrators. Photograph: Brian Lawless/PA

Anyone listening to some of the media coverage and political rhetoric in the last week would be forgiven for thinking that the courts have been imprisoning people for protesting against water charges and water metering. This is simply not the case.

In fact what happened last week was that a High Court judge imprisoned four people for repeatedly harassing and intimidating workers. The court imprisoned them only after it had given them the option of avoiding time in jail by apologising for breaching a court order and undertaking not to intimidate installers again.

The mass opposition to water charges has been one of the largest and most effective protest movements in the history of the State. Not only did it give rise to massive marches but it also forced a significant shift in policy.

It has been an almost entirely peaceful movement. There has been a small element within the anti-water charge protest movement, however, which has been nasty and intimidating. When suggestions first arose last autumn that some water protesters were intimidating water-meter installers it was dismissed as establishment spin.

However, in October, GMC/Sierra, a company involved in installing meters, sought a court injunction to protect its workers who, it argued, were being harassed by some protesters. After a court hearing which included several days of evidence and submissions from the company and the water protesters, a High Court judge found that harassment had occurred and granted an order prohibiting protesters from being within 20m of meter-installing works. The court did so, not as some randomly chosen exclusion zone, but as the best way of ensuring the workers were not interfered with or intimidated.

In a balanced judgment delivered last week, the judge discounted some of the incidents where he was not satisfied interference was proven. He also found two of the people about whom allegations of breach had been made had not done so and later granted them their costs. He held the other five however had breached the court order.

One of those five, through his solicitor, indicated a willingness to apologise and to make a commitment not to interfere with installing again.

The other four, through their counsel, told the court they were not prepared to enter any bond which might have enabled the court to suspend any sentence nor were they prepared to make an undertaking not to breach the order again. The court correctly concluded these four were therefore effectively inviting the court to imprison them.

The basis of the court’s decision lay not in any sense of insult to the court but rather the necessity to protect workers. The judge found the incidents observed on video, amounted to “harassment and intimidation of workers in their lawful work” and it was “unfair and cowardly” the workers were “subjected to ongoing harassment and intimidation on a daily basis as they simply set about carrying out their lawful duties”.

The court found some of the incidents were being carefully orchestrated to generate and provoke civil disobedience, in contrast to the actions of the many people who have carried out peaceful protests against water charges. The court said video evidence showed “distinct small groups of people persistently move in around and encircle the workers who are attempting to install water meters”.

Again this week the judge offered those imprisoned the opportunity to be released by purging their contempt.

These four were sent to jail not because they protested against water meters or water charges but because they harassed workers. They remain in jail only because they refuse to give an undertaking not to continue to do so.

One would expect politicians of the left to welcome this court decision as a vindication of the rights of ordinary workers to go about their jobs without undue interference. Such is the convoluted logic of some of those now most prominent on the left wing of our politics, however, that the opposite has been the case.