There is a precedent for state economic planning: wartime United States 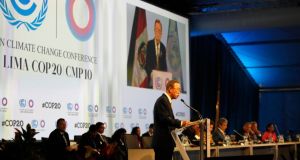 ‘One of the themes at Lima has been of the need to “learn from Kyoto”.’ United Nations Secretary-General Ban Ki-moon at the opening of the High Level Segment of the UN Climate Change Conference in Lima, December 9, 2014. Photograph: Mariana Bazo /Reuters

The UN Conference on Climate Change which comes to a close in Lima tomorrow is not intended to produce an agreement but to prepare the way for talks in Paris next year on a deal to replace the Kyoto Protocol. The protocol, endorsed by 28 developed and “transitional” countries” was agreed in 1997 but didn’t come into effect until 2005. It expired at the end of 2012. One of the themes at Lima has been of the need to “learn from Kyoto”.

Within days of the Kyoto text coming together, it began to fall apart. Under pressure from Congress, Bill Clinton declared that the US wouldn’t sign up until India, China and a number of other developing countries agreed to sign. Some senators took to arguing that climate change was a con-trick got up by envious enemies of the US. Some are still at it.

Following the Republican triumph in the mid-term elections, Jim Inhofe of Oklahoma is set to become chairman of the Senate environment and public works committee. He has been chosen precisely because he is the most passionate and scornful denier of climate change in Congress. He dismisses the opinions of 97per cent of the world’s scientists on the grounds that scientists “don’t live in the same world as the rest of us.”

In Senator Inhofe’s world, scientists are weirdos peddling nonsense, probably deliberately, to do down America.

Despite this, the mood music from Lima has become more harmonious over the past week. Kyoto did make a difference, it’s pointed out. It was followed by a significant drop in global emissions. But this was largely brought about by the collapse of heavy industry in eastern Europe after the disintegration of the Soviet Union and the downturn in the west as a result of the banking crisis.

David Cameron promised the greenest government ever and even mushed a team of huskies across the Arctic ice to dramatise his seriousness.

Can governments be made to change and markets compelled to accept tighter regular regulation than they have ever known? Fortunately, there is precedent.

On December 7th, 1941, the Japanese bombed Pearl Harbour. By Christmas Eve, President Roosevelt had handed Congress a list of the military hardware which would have to be produced if the war was to be won: 60,000, planes, 20,000 anti-aircraft guns, 45,000 tanks, eight million tons of shipping. He told them the cost would come to more than $50 billion – equivalent to total US GDP at the time. And he wanted all this done pronto.

In January 1942, the three major US car manufacturers were told to stop production of cars and to switch to tanks, Jeeps and guns. Steel companies were given specifications for the sort of steel to be produced and what factories to send it to and in what quantities. The factories were told what to make with it.

Union leaders imposed – not without resistance – no-strike deals. Industry chiefs were drafted into the War Production Board. Many were paid a dollar a year on the grounds that the masses couldn’t be expected to knuckle down if the rich were living it up.

Woodie Guthrie was hired to write a song to boost morale: “From Washington to Oregon you can hear the factories hum/Making chrome and making manganese and fine aluminium/Now roar the Fighting Fortresses to fight for Uncle Sam . . .”

The economy was planned and controlled from Washington in a way unknown outside “communist” countries, and this was accepted without significant demur by the vast bulk of the population.

Why? Because all of society, effectively, was persuaded that the country faced an existential threat, that these measures were necessary for survival.

The same is true today in face of the threat of global warming. The current system of economic organisation, the free market, is the main impediment to the changes needed to save the world.