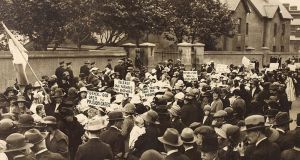 Cumann na mBan protesting outside Mountjoy Prison in 1921 during the Irish War of Independence. Placards read “Mother of God, open the prison gates”; “Release our Fathers and Brothers”; and “Mother of Mercy, pray for prisoners”.

As Ireland enters a new phase of centenary commemorations, a glimpse into the more horrific aspects of the War of Independence and Civil War is anticipated. During armed conflicts, women’s bodies also become battlefields and Ireland’s revolution was no different.

Transgressive violence was perpetrated against women but it disappeared from public discourse after the Civil War due to conservative attitudes towards women, sex and sexuality in the new State, combined with a desire to forget the worst atrocities of the war. The absence of a truth or reconciliation process ensured any violence that was perpetrated against women during the revolution could be concealed or forgotten.

The forced shorning of women’s hair was widespread. Elizabeth Bloxham, a Cumann na mBan activist, recalled in her Bureau of Military History witness statement: “These were the days when girls were roughly searched and had their hair cut off by British soldiers.” Peg Broderick-Nicholson from Galway described how she was called out from her bed and had her hair cut “. . . to the scalp with very blunt scissors”. Irish rebels meted out this punishment in equal measure.

The sexual justification for “bobbing” women was described by Leo Buckley, of the Cork no 1 Brigade, IRA: “I remember at the time, young girls from Cork going out to Ballincollig to meet the British soldiers. We curbed this by bobbing the hair of persistent offenders. Short hair was completely out of fashion at the period and the appearance of a girl with ‘bobbed’ hair clearly denoted her way of life.”

The “way of life” remark indicates policing women’s sexuality was a motive behind such shearing. In another incident, Michael Higgins of Belclare, Galway, recalled how holy water was evocatively thrown as the hair of a young woman was forcibly cut for passing on information to an RIC officer she was considered close to.

For decades, historians of the Irish revolution either completely omitted discussion of attacks on women or considered them “lenient” punishment, with men presumed to have experienced the worst atrocities of the revolution.

This is in stark contrast to the histories of much larger wars conducted in Belgium, France and Germany and civil wars elsewhere, including in Spain and Greece, where the head shaving of women has sparked immense debates about the sexual, gender and power relations exhibited by this form of punishment.

Hair shorning was and is a serious assault. Frequently, it hurt and traumatised women because of the force involved. Mary Alleway, for example, active in the Youghal branch of Cumann na mBan, described in her military service pension application how she was beaten by British troops and had her hair cut off, while her house was raided several times. The public humiliation and stigma of having a scalped head within the community followed. First-hand accounts reveal that hair could also be pulled and roughly handled with other injuries and harassment also inflicted (such as cuts from shears or razors, physical assault, beatings, shouting/verbal abuse, undressing, dragging, mob behaviour and sexual assault or rape).

In May 2018, the Military Service Pensions Collection project published new files in relation to 1,442 people online. Asylums, institutionalisation and nervous breakdowns feature in pension applications along with reports of gender-based and sexual violence.

Delia Begley from Ennis suffered a nervous breakdown after attending men who were wounded while making explosives in 1919 and which later saw her in the care of the Sisters of Charity religious order. Mollie O’Shea, active in the Cumann na mBan Kerry no 1 brigade, suffered lifelong insanity after the revolution. Mollie suffered a nervous breakdown after her brother was killed in what is considered the Civil War’s worst atrocity, the blowing up of eight anti-Treaty prisoners by Free State troops in Ballyseedy, Co Kerry, in 1923. The file details the trauma suffered by Mollie during the Civil War, including an “outrage” after which she was “very ill”.

Margaret Doherty from Foxford, Co Mayo, was one of the women in Ireland’s revolution subjected to a horrific gang rape by “three masked National Army members”. Margaret’s application made on her behalf states she died in 1928 in “the mental hospital” in Castlebar as a consequence of her ordeal.

In all these cases, the detrimental impact of violence on the physical and mental health of the women is clear. Other documented cases of transgressive violence include the gang rape of a Mrs Biggs in Co Tipperary by anti-Treaty men and the murder of 45-year-old Kate Maher in Dundrum, Co Tipperary, last seen in the company of British soldiers from the Lincolnshire regiment, in the local pub.

Kate was found dead with extensive vaginal wounds and a blow to the head with a blunt instrument, and nobody was found guilty in a military investigation. The Cork’s War of Independence Fatality Register notes that Bridget Noble from Castletownbere first had her hair cropped as a warning before she was ultimately killed by the IRA for not ceasing to be an informer.

The experience of women must be considered if the commemoration of the War of Independence and Civil War is to seriously address the most difficult questions of the past. The question of the scale of violence against women, when compared to larger-scale wars or World Wars, is a moot point. Gender-based violence occurred and it is an aspect of the revolution that has been hidden, suppressed and denied for too long.

1 Luke ‘Ming’ Flanagan bares his bottom half to European Parliament
2 Miriam Lord: Not a bare ankle, hairy knee or a Ming the Trouserless to be seen at Covid committee
3 Gardaí investigate Dublin Black Lives Matter protest over Covid-19 rule breach
4 Do I want things to go back to normal? I’m not so sure I do
5 Normal People: Full-frontal nudity was not its most radical feature
Real news has value SUBSCRIBE