Mother Teresa, who becomes a saint on Sunday, began her life as a nun in Dublin 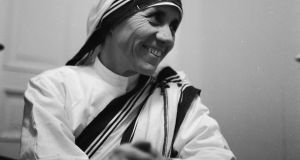 November 1960: Mother Teresa (1910 - 1997), the Albanian nun who dedicated her life to the poor, the destitute and the sick of Calcutta, earning the Nobel Peace Prize in 1979. (Photo by Keystone Features/Getty Images)

Sunday will see the canonisation of Mother Teresa.

In 1992, with all the innocence of youth, I wrote to her seeking an interview. Months passed without me hearing anything. Then out of the blue I received a letter with a postmark from India.

Munching my cornflakes as I opened the envelope I nearly fell off my chair when I read her invitation to meet her on her upcoming visit to Dublin.

When I got to her sisters’ convent a skeletally thin person with a cadaverous pallor stared fixedly at the floor just inside the front door. Mother Teresa favoured him with one of her big smiles. She was as concerned about his care as a mother hen with chicks.

Although I was at least a foot taller than her I felt totally dwarfed. Whatever this indefinable thing called presence is she had it in abundance. She had the most marvellous eyes which gave her a presence disproportionate to her physique.

At that time this frail Albanian woman had incredible energy. She had this wall of certainty about what her calling was. My enduring memory though is of hercompassion.

I wondered what had kept her going all those years: “God’s own image is in every single child, no matter what that child is, disabled or beautiful or ugly – it’s God’s beautiful image created for greater things – to love and be loved. That is why you and I and all of us must insist to preserve the gift of God, for it is something very beautiful.

“That little one who is unwanted, what a terrible suffering that is. Today it is the greatest disease, to be unwanted, unloved, just left alone, a throwaway of society. There are thousands, millions of people who die for lack of bread. There are thousands, millions, of human beings who grow weak for lack of a little love because they would like to be recognised, even if just a little. Jesus becomes weak and dies in them. I believe that all of us are called to love until it hurts and that is what keeps me going,” she said.

Her last action was to lift her hand and touch and kiss the crucifix. Her final words were to offer her sufferings along with those of Jesus, and all the while whispering, “Jesus, I love you. Jesus, I offer myself to you. My God, I thank you, praise you and adore you. Jesus I love you . . .”

Mother Teresa was one of those very few people to be canonised by popular acclaim, even before her death. Amid the dirt and the dying in Calcutta’s slums, in the depths of the most appalling poverty for many people she revealed the face of God.

Pope St John Paul 11 personally fast-tracked her beatification because “she made those who had been defeated by life feel the tenderness of God.”

Many elements of her story are familiar, such as winning the Nobel Prize for Peace in 1979, but what is often forgotten is her deep affinity for Ireland.

The order she chose to join was an Irish one, the Loreto Sisters, and she began her time as a nun by serving two months as a novice in Rathfarnham in 1928 to learn English.

Her ties with Ireland remained strong. She returned many times and was given the Freedom of Dublin in 1993. At the height of the ‘Troubles’ in 1971 she sent a group of her sisters armed just with bedrolls and a violin to Belfast to help “in whatever little way” they could.

Even after her death her Irish connections remain as her sisters continue work in each of the four provinces: in Dublin, Blarney, Sligo and Armagh.

My final question to Mother Teresa was whether Ireland held a unique place in her affections. With a shy smile and almost a whisper she answered: “By blood and origin I am all Albanian. My citizenship is Indian. I am a Catholic nun. As to my calling, I belong to the whole world – and to Jesus. The people of the world are my people but I will always have a special place in my heart for Ireland.”