Here and there – An Irishman’s Diary on New York 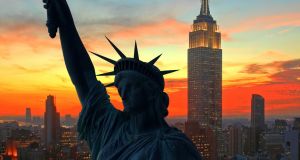 Back in 1989, I flew to New York to conduct interviews with the “undocumented”. Photograph: Getty Images/Hemera

Each year, as the Feast of Noël approaches, my mind goes back to an assignment I carried out for this newspaper in December 1989. Ireland had been going through a recession and there was a surge in emigration to the US.

However, due to visa restrictions, many of those who went to the Land of Opportunity were illegal immigrants who were afraid to go home for Christmas in case they would be refused admission to the States on their way back.

That remains a serious problem although now we have our own immigration issues here at home.

Back in ’89, I flew to New York to conduct interviews with the “undocumented” – their actual names were not used in the published version –and to check out the immigrant scene in general. Given the time of year, there was a great deal of enthusiastic socialising on the “Irish Mile” in the Bronx where bars were packed to the doors with young people: it was like coming across a lost tribe from your native country.

For all the gaiety and good humour, there was an underlying sadness because so many revellers were unable to attend the family get-together back at home. One of my abiding memories is of a young woman, at the Archway Tavern on Jerome Avenue, showing-off the Irish-dancing steps she had learned in another world, as part of a different agenda. Another emotional moment came when a band called Toss the Feathers invited three women customers to join them on stage for a rendition of Fairytale of New York.

In addition to my professional activities, I took advantage of the New York trip to link up with a writer and historian I had last met 14 months earlier in the rather different surroundings of Barcelona. In October 1988, William Loren Katz and I were both attending a series of events to mark the 50th anniversary of the standing-down of the International Brigades who fought on the republican side against fascism in the Spanish Civil War.

There was a significant number of Irish veterans in attendance and I covered the gathering for The Irish Times. Bill Katz later co-authored, with Marc Crawford, a book on the US volunteers entitled The Lincoln Brigade: A Picture History, first published in 1989.

Among the Irish who served on the republican side, the most prominent was Frank Ryan (1902-44), well-known as a political activist back home. Indeed, this was his second civil war, as he had fought and been wounded in the campaign against the Anglo-Irish Treaty and was interned by the Free State authorities.

In Barcelona, I got to meet Steve Nelson, a prominent American radical who had been a senior member of the Lincoln Brigade.

He had some fond memories of Ryan and was unaware that the Limerickman had, through no fault of his own, ended up in Nazi Germany, where he died before the end of the second World War. Bill Katz was a close friend of Nelson’s and the three of us ended up going to lunch each day to discuss the state of the world.

Steve Nelson died in 1993 at the age of 90 and Bill Katz more recently, on October 25th last, aged 92. They both received obituaries in the New York Times. Nelson had been a leading member of the Communist Party but left in 1957 after Soviet leader Nikita Khruschev revealed the horrors that had taken place under the regime of Stalin.

William Loren Katz, Brooklyn-born with a Jewish immigrant background, wrote some 40 books, most of them dealing with aspects of African-American history. His scholarly output is a fine example of someone crossing an ethnic divide to ensure that an oppressed minority is given due recognition. Among his best-known books are The Black West (1973), a documentary and pictorial history of the African-American role in the westward expansion of the United States, and Black Indians (1986), which describes how runaway slaves took refuge in Native American villages and found acceptance and friendship among those communities. I maintained regular contact with Bill and his wife Dr Laurie Lehman over the years and had the pleasure of welcoming them when they came on a visit to this country.

The Irish-language tribute comes to mind: Ní bheidh a leithéid arís ann (We’ll never see the like of him again).