Flashback to the Christmas story of our childhood 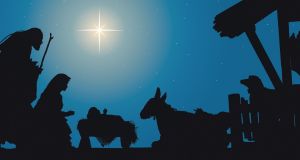 We admired the steadfast courage of Mary and Joseph, and we were appalled, though maybe a little thrilled too, by the despicable Herod, a killer of children. Photograph: iStock

The street I grew up on in Dublin in the 1960s was one of small terraced homes where most families included a clatter of children. On dark evenings during Lent, when most of us went to the same weekday Mass in the local church, the eruption of neighbours out their front doors was like something synchronised, all of us heading in the same direction, water in a runnel moving towards the stream.

I have fond memories of the long curving street, the chiaroscuro created by the street lamps, the households merging as we walked towards our local place of worship.

We tend to forget the intensity of the inner life of the child. But when we’re older, it comes back to us every now and then, a sudden emotional opening; an epiphany.

There was a pew in the south transept where I liked to sit, impressed by the fat burning candles on the altar, the rich glow of light on the gold of the priest’s vestments, the chalice, the tabernacle door. I liked the smells, the ceremony, the seriousness; the priest raising the monstrance towards God the Father.

Just about every child of my generation was familiar with the teaching that you should be wary of the attention-seeking hypocrite up in the front pew. We noted them in the church, even as we listened to its teachings.

We knew what Jesus meant when he said it was he who is without sin who should throw the first stone, and we took comfort from his statement that blessed are the gentle.

The Christmas story was as familiar to us as the family furniture. We admired the steadfast courage of Mary and Joseph, and we were appalled, though maybe a little thrilled too, by the despicable Herod, a killer of children.

That you should do unto others as you would have them do unto you, was most definitely a challenge, though no-one challenged its wisdom.

Because of our belief in God the Father, my fellow child believers and I grew up in the company of someone who watched over us, understood our every failing, and knew the truth of our overarching good intentions. He had access to our every thought and deed, and loved us unconditionally.

This presence accompanied us as we played street football, robbed apples from back gardens, sought to get one over on our closest siblings. At every waking moment we could, in our dealings with him, be as effusive and open-hearted as we wanted, knowing no-one knew, other than the presence who loved.

If you wanted to give a child a gift, it’s a hard one to beat.

In my early 20s my religious belief fell away, almost without my noticing. My easy transition to non-belief had nothing to do with the failings of the institutional church, a church which, at times, can act as if entirely ignorant of the teachings it exists to propagate.

I’ve never felt an urge to re-visit my shrugging off of religious belief. But in recent years I’ve come to greatly appreciate the fact that I grew up a believer.

Even with all we now know, it remains the case that the central argument of the culture that pervaded the terraced suburban street of my boyhood, was that the greatest good in the world, and the greatest challenge for each of us in our lives, is to love.

Even if you were more interested in the adventures of the heroes that graced the pages of your weekly comic, there was no escaping the central place the culture gave to the Gospels, and the messages contained therein. It was the sea in which we swam.

We were sent off into adult life with stored memories of a pew in a suburban church, the glow of candlelight, the idea of transcendent love.

At this time of year, if we so wish, we can revisit this former belief we had that, despite the disappointments and upsets that are part of existence, the suffering and the horror, the existence of people such as King Herod, it is the evident goodness of Mary and Joseph that governs the world; the promise of the newborn child.

We might even, as non-believing adults, examine, question, and doubt, and yet conclude that these stories we were told, and teachings we were given, still hold, and that they are the common property of those who once believed, those who still believe, and those who never believed.

We might decide that, finally, it remains valid to embrace the conviction that accompanied our childhood years – that love has dominion, not just over the momentarily lucky, but over the entire world, always.