Fintan O’Toole: The lesson of Irish politics is keep calm and carry on corruptly 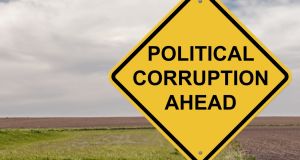 There is only one way to root out corruption and that is to have an independent, properly resourced anti-corruption body with full police powers. Photograph: Getty Images

Don’t believe a word of it.

After last night’s sickening revelations of yet more shenanigans in public life there will be pledges to clean up Irish politics once and for all. Just like the last time.

In July 2012, the Government announced that in response to the Mahon tribunal’s findings of “endemic and systemic” corruption in Irish political life it was going to establish an independent planning regulator.

This was one of the central recommendations made by Mahon. Two things were crucial: that the regulator be independent of politics and that it have real powers to go after corruption. This new regulator was to be a very powerful anti-corruption body: “In particular, the Tribunal is recommending that the Regulator should also be entrusted with the power to investigate possible systemic problems in the planning system, including those raising corruption risks, with the aim of making recommendations to address those problems . . . The Regulator should have sufficient powers to carry out his or her functions effectively, including the power to question witnesses and compel the production of documents.”

The Government agreed “in principle” to implement this.

At last – independent oversight of the planning process to root out the related evils of bad planning and corruption in local government.

Except for two things: first, three years on, we still do not have the promised planning regulator and it is highly unlikely the office will be established before the election, after which all bets are off; second, when the Government published its proposals for the Office of the Planning Regulator (OPR), they were emphatically not what Mahon recommended.

Crucial elements had been watered down to the point of insipidness.

The proposed watchdog’s independence from politics has been completely stripped away. The OPR, even assuming it is established, will not, as Mahon recommended, take over the planning functions of the minister for the environment.

It will merely advise the minister that it thinks there is a problem with a particular plan or decision. All decisions will still rest with the minister, ie very much within the party political arena.

The OPR will not be independent in any meaningful sense. On the contrary, it will be obliged by statute to have regard to “the policies and objectives for the time being of the Government”. If, for example, a government says it wants development on a Celtic Tiger scale, the OPR will have to apply those standards.

And the OPR will emphatically not be an anti-corruption investigator. There are no references in the Government’s draft legislation to any powers of OPR to conduct real investigations of individual councillors, question witnesses and compel the production of documents from private individuals.

All the OPR will be able to do is to review a local authority where it suspects corruption or malpractice and “make recommendations” to “the planning authority or the minister”.

The OPR is prohibited from stopping any specific planning application even if it thinks funny business is going on: “The Office of the Planning Regulator shall not exercise any power or control in relation to any particular case with which a planning authority . . . is or may be concerned.”

None of this is accidental. The Government took a very long time to come up with proposals that are consciously, deliberately and wholeheartedly pathetic. The response to naked corruption is to stitch together a pretty fig leaf.

If we get anything in the lifetime of the Government, it will be a weak planning regulator, appointed by government, subject to government policy, answerable to the minister and able to do nothing more than report problems to a minister who may or may not take those reports seriously.

This response is of a piece with the Government’s general approach to endemic corruption: its dropping of inquiries into six local authorities and their replacement with toothless “reviews”; its failure to end virtual impunity for white-collar criminals, in spite of warnings from the outgoing financial regulator Matthew Elderfield that Irish laws are too weak to deter crime; and its refusal to create and resource a proper Garda unit to investigate and prosecute corruption and fraud. (The forthcoming review by the Garda Inspectorate will point to the absence of just such a unit.)

So spare us the hand-wringing.

There is only one way to root out corruption and that is to have an independent, properly resourced anti-corruption body with full police powers and the capacity to bring prosecutions under clear and strong laws.

All the rest is window dressing. What stops corruption is the fear that you will be caught and the certainty of severe punishment if you are. Neither of those is a serious worry in Ireland. The message is: carry on corruptly.