Fintan O’Toole: On a wing and a prayer – how the IRA and the church banished abusers 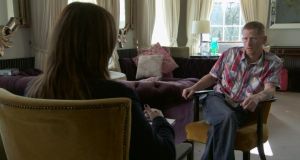 In recent Irish history, just two bodies have had the power to order a citizen into exile. No government, no court of law, no official body, however powerful, could apply the sanction of banishment. But the Catholic Church could. And so could the IRA. Both the church and the so-called republican movement had oath-bound members, sworn to obedience, who could be shifted at will across borders.

Like all extreme powers, this one fed corruption. It was very useful indeed when either organisation needed to make an embarrassing problem go away. But when that problem was a man who enjoyed raping children, both organisations also knew that he was not just going away – he was going somewhere else, where he might well do it again.

Sexual exploitation and in particular the abuse of children can happen anywhere. And it can be covered up by any kind of institution. Left to their own devices, institutions will always tend to put their own interests first. Their first instinct will be to avoid damage by silencing the victim and keeping the perpetrator under wraps. As Sinn Féin supporters were quick to point out on social media this week, the BBC, which broadcast Spotlight’s investigation into Paudie McGahon’s allegations that he was raped by a senior IRA figure in the early 1990s, was guilty, in relation to Jimmy Savile and others, of just such an institutional cover-up itself.

There are, nonetheless, some factors that are quite specific to the church and the IRA. One is that power of exile, the ability to remove alleged perpetrators from the source of immediate embarrassment while giving them access to a whole new set of possible victims. We know that the church did this routinely – shifting alleged abusers across the Border or to Britain, the United States or even to Africa. And we also know that Sinn Féin did this too.

Liam Adams, whom his brother, Sinn Féin president Gerry Adams, knew to be a child rapist, and as such posed a continuing danger to children, was moved from Belfast to Louth and back again. The alleged attacker of Maíria Cahill was ordered into exile by the IRA. So was the alleged attacker of Paudie McGahon. It seems highly unlikely that this pattern was not repeated in other cases.

Another distinctive characteristic peculiar to both organisations is that each had its own code of law which it regarded as superior to the civil law enacted by parliaments. Bishops dealing with abuse cases believed they were doing the right thing if they adhered to the internal requirements of canon law. A private code sanctioned behaviour which in other circumstances would have seemed obviously obnoxious. The IRA, meanwhile, saw itself as the true government of Ireland and its own internal regulations as better law than any passed by the Dáil or enforced by the Garda. Thus both the church and the movement set up

their own kind of kangaroo court, in which the victim’s rights would always be subordinate to the needs of the organisation.

Thirdly, both the church and the IRA could intimidate victims in special ways. Perpetrators always threaten their victims with bad consequences if they tell what has happened. But the church and the republican movement could back up those threats with terrible power. In the case of the church the power was spiritual – obey us or go to hell. In the case of the IRA it was the power of sheer thuggery. This was an organisation whose primary function was to kill people. Even after the Belfast Agreement there was no doubt in anyone’s mind that its members could inflict extreme violence on anyone they chose.

Fourth, the church and the republican movement both had a long-established leadership that considered itself untouchably righteous. When scandals began to emerge in the church, the response of senior bishops and cardinals was not just one of personal upset. It was characterised by a barely repressed anger, not that these things had happened but that anointed men were being rudely questioned about them. Sinn Féin has its own anointed, most obviously Gerry Adams. His public responses to questions about Liam Adams, or about Maíria Cahill or Paudie McGahon have had a tone of lofty impatience strikingly reminiscent of that adopted by cardinals Cahal Daly and Desmond Connell when they were under similar pressure.

This sense of an anointed leadership leads to something else the church and the movement share: a cult of internal obedience. Loyalty is valued far above moral courage. In this case, though, Sinn Féin has been even more impressively cult-like than the church. There were always a few brave priests and nuns who broke ranks. So far, Sinn Féin’s response has been breathtakingly, some might say creepily, uniform. The only breaking of ranks has been from those, like Francie Molloy this week, who went too far in calling the victims liars and failed to understand the nuances of the party line.

Lastly, these similarities have created a similar problem for both organisations – a difficult relationship with the concept of truth. In both cases, the first internal question was not “Is this true?” but “Why are they saying this now? Who put them up to it?” And in both cases, truth itself became a highly flexible notion. Cardinal Connell infamously told us that he practised “mental reservation” when he withheld information from the authorities. Sinn Féin has its own version of mental reservation. In the case of each of the three victims who have come forward (Áine Adams, Maíria Cahill and Paudie McGahon) it has adopted exactly the same position of partially accepting (and partially denying) what they say. The line is carefully calibrated – the victim is telling the truth when he or she says that he or she was raped. But everything else the victim says about what happened afterwards when senior Sinn Féin figures were informed of the rape is subjected to doubt or outright denial.

And if the details of those doubts and denials have to change, the truth, the party’s flexible friend, can change with it. Most starkly in the case of Liam Adams, all of Sinn Féin’s leading figures have announced that whatever Gerry Adams said about it was true, even when he said things that were not compatible with each other.

All of this proved, of course, fatally damaging for the church and became ultimately unsustainable. What’s not at all clear is whether this will prove to be the case for Sinn Féin too. The evidence so far is that the party’s supporters don’t really care all that much. Sinn Féin has managed another kind of exiling – its past is another country. The rapes and the cover-ups are seen as having happened in that murky, morally uncertain place called “the conflict”, where they did things differently. This seems to work even for events that actually happened long after the IRA’s “war” was over. And this may be where the question ultimately lies: so long as so many people have a mental reservation over the conflict itself, Sinn Féin’s past will be a protected space.

1 With Lincoln looking on, the crowd dropped to their knees as 7pm approached
2 In six months we will be in the grip of a 1980s-style recession
3 Luke ‘Ming’ Flanagan bares his bottom half to European Parliament
4 ‘Tralee felt friendlier than Killarney. We discovered a different welcome there’
5 Easing restrictions: What exactly will happen next Monday?
Real news has value SUBSCRIBE