Diarmaid Ferriter: Eight years on and it is political business as usual in Ireland

What we are witnessing are testosterone fuelled, arrogant assertions that the establishment have things under control 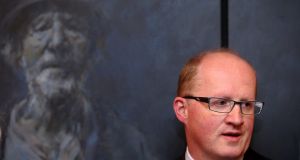 There is not a chance the Government will fulfil Philip Lane’s “hope” that the next government “takes seriously” the need to balance public spending with the need for a “safe level of public debt”. Picture Jason Clarke.

At the end of the riveting film The Big Short, now showing in Ireland and based on Michael Lewis’s book that charted the spectacular fraud and avarice that led to the US financial collapse in 2008, the narrator makes a joking assertion that such was the level of malpractice underpinning the economic crash in the US, safeguards were put in place to ensure it would never happen again and those responsible were held accountable. Immediately after that we are told the truth: that nothing changed and no one was held accountable.

Eight years on and it is business as usual in Ireland as well, in economics and politics. It took four days for the Labour leader to rule out seeking support from Michael Lowry, who the Moriarty tribunal found “secured the winning” of the mobile phone licence for Denis O’Brien’s company Esat Digifone in 1995, and that O’Brien made two payments to Lowry totalling £500,000.

This week, a High Court judge found Lowry engaged in “a litany of falsification and deception” in refusing to co-operate with the tribunal.

But no matter; Lowry is still likely to top the poll in Tipperary and the Taoiseach has refused to rule out doing political business with him, the same Taoiseach who has made solemn declarations about patriotism, sovereignty and “standards”.

More of the same

This week also saw the appearance of Philip Lane, the new governor of the Central Bank, before an Oireachtas committee. In far-too-polite language, he essentially asked politicians to stop making reckless promises to spend money that should be used to reduce national debt.

But all Lane can do, in his own words, is “hope” the next government “takes seriously” the need to balance public spending with the need for a “safe level of public debt”.

There is not a chance of that happening.

As the Central Bank’s chief economist Gabriel Fagan asserted, this is not just a question for political parties, it is also a question for voters. But it also seems particularly ironic that in the week the banking inquiry report identified such failures in banking, regulation and government, we are left with the spectacle of the governor of the Central Bank, described in the banking inquiry report as “the leading guardian of financial stability of the State”, having to hope or wish that a government would take seriously the economic threat its promises pose.

Speaking about the report , inquiry chairman Ciarán Lynch observed that in relation to the evolution of the crash, there were opportunities for political intervention, but as the years passed it was a case of “damage limitation”.

The financial institutions, whose executives and directors were also responsible for the crash, are currently bombarding us with nauseating advertisements promising they will make our money go further and reward bravery, while desolate home- and landowners without insurance watch from a distance as their properties float, as they await the next, inevitable deluge.

When researching another of his books, Boomerang, Michael Lewis spent time in Ireland in 2010 and suggested Ireland’s financial disaster “was created by the sort of men who ignore their wives’ suggestions that maybe they should stop and ask for directions.”

He also observed that Irish politics had a “frozen-in-time quality”. It still has: as long ago as 1997, Dick Walsh in this newspaper wrote about the general election of that year. It really should have been, he argued, “about fairness, public service and the nature of society”, but ended with “a lopsided populist appeal which reduced all issues to one: tax reductions at any cost”.

Now we are witnessing a rerun of this, presided over by a Taoiseach who in 2013 insisted “we need to ensure that we never return to the culture that pushed us over the edge”.