Micheál Martin, Clare Daly and PAC have all contributed to bad political form 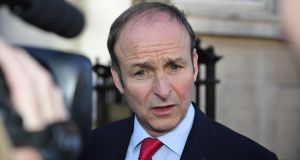 Fianna Fáil leader Micheál Martin: reverted to the oldest trick in the political book in his effort to curry favour with the public and cast the Government in an unfavourable light by asking whether or not TDs should take a Halloween break. Photograph: Aidan Crawley

Is it any wonder so many people hold politicians in such low esteem given the shenanigans in the Dáil during the week?

The “new politics” in which a considerable amount of power has shifted from the executive to the Dáil was widely hailed as a reforming process which would give TDs a greater say in the shaping of policy and make the Government more accountable for its actions.

The leading proponent of a new way of doing things was Fianna Fáil leader Micheál Martin. The experiment of a Fine Gael-led minority Government facilitated by the main Opposition party rather than a grand coalition of the two biggest parties was his creation.

Yet in the Dáil on Tuesday he reverted to the oldest trick in the political book in an effort to curry favour with the public and cast the Government in an unfavourable light on the petty issue of whether or not TDs should take a Halloween break.

Martin surprised everybody in the chamber, including his own TDs, by getting to his feet on Tuesday and demanding that the Dáil should sit next week instead of taking its planned mid-term break.

It has been an opposition ploy for decades to decry planned Dáil holidays and insist, with mock seriousness, on sitting for much longer. In the past, opposition parties had the comfort of knowing that their holidays were safe as the Government would vote down their ritual attempts to shorten them.

What Martin seemed to forget was that all has this now changed and at his own behest. Dáil sitting times and days off are no longer regulated by the Government but by the business committee of the House.

Thinking quickly on her feet, Government chief whip Regina Doherty pointed out that the business committee of the House had decided on the Halloween break against her advice so, instead of opposing Martin, as he had obviously expected, she backed his proposal to sit next week.

Sinn Féin did the same so Martin’s motion calling on the House to scrap the planned break was carried by a massive majority with only a straggle of Independents voting against. Independent TD Mattie McGrath was able to luxuriate in denouncing Martin for being a populist.

Given that the creation of the business committee to allow the Dáil rather than the Government order the business of the House was Martin’s own pet project, his attempt to undermine it was bizarre.

Now Fianna Fáil does have a serious problem with the way the business committee is operating. There are 10 members of the committee and the party has just one representative while Fine Gael has two. The committee is dominated by left-wing TDs and Independents.

The outcome has been that when it comes to Dáil debates the TDs who are members of smaller parties and groups are getting far more opportunities to contribute than the TDs of the bigger parties. This is particularly galling for Fianna Fáil TDs who can’t speak nearly as often as they would like.

It is a real dilemma for the party but reverting back to cheap political stunts is not the answer.

If Martin shot himself in the foot, the performance of Independent TD Clare Daly was inexcusable. She used the privilege of the Dáil to denounce a district judge who had presided in a speeding case involving herself and issued a bench warrant for her arrest.

While she may have a point about the lack of accountability in the way courts operate, the way she went about it was both an abuse of privilege and a serious trampling on the doctrine of the separation of powers.

Aside from the impropriety of using the Dáil to attack a judge, Daly also seemed to see nothing wrong in demanding special treatment for herself as a TD. It seems to reflect an attitude that some citizens are more equal than others.

Mind you, she is not the only TD who has wandered into dangerous territory. The Public Accounts Committee hearings into Nama appear to have abandoned any pretence at impartiality.

It is no surprise Sinn Féin deputy leader Mary Lou McDonald has adopted an aggressive and hectoring tone in her questioning of Nama officials, but other members of the committee have joined in for good measure.

The nadir was reached two weeks ago when the committee chairman, Seán Fleming of Fianna Fáil, remarked: “If I was a referee every Nama person who has appeared before us would have received a red card. I am chairman, however, and want to hear the end of the process.”

Now the PAC is supposed to be holding an independent inquiry into the controversial topic of Nama’s operations in Northern Ireland on which there is a clear conflict between two State bodies, Nama and the Comptroller and Auditor General.

Given that the comptroller works directly to the PAC, it is not surprising that members are more inclined to his side of the argument but that does not excuse the blatant hostility to Nama witnesses which has been evident in its hearings.

In the light of the hearings to date and the chairman’s red card comments, it is difficult to see how there can be any prospect of an impartial report which attempts to sift the truth from a very complex set of transactions.

The PAC hearings confirm again the wisdom of the Irish electorate back in 2011 in refusing to give quasi-judicial powers to Oireachtas committees. The propensity of our politicians to play to the gallery trumps fairness every time.

Whatever the shortcomings of our judicial system, the vast majority of people still believe they will get impartial treatment if, for any reason, they have to appear in court. They can have no such confidence in Oireachtas committees.

1 Coronavirus: Cabinet has not varied strong advice from NPHET on Dublin restrictions
2 Life in Level 3: What will happen under new restrictions in Dublin?
3 Coronavirus: NPHET letter to Government warns of ‘extremely critical juncture’ for Dublin
4 Michael McDowell tells Seanad he has ‘no confidence’ in NPHET
5 Coronavirus: 253 more cases and three further deaths reported in State
Real news has value SUBSCRIBE