O’Malley approved as US ambassador to Ireland 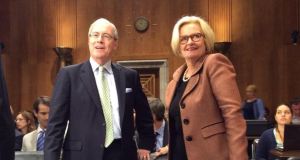 US ambassador to Ireland Kevin O’Malley speaking with Missouri senator Claire McCaskill at confirmation hearing before the Senate foreign relations committee in July.

Irish-American lawyer Kevin O’Malley was approved by the US Senate as the new ambassador to Ireland, finally confirming his appointment to a role that has lain empty since December 2012, a record vacant period for the position.

The Senate signed off on St Louis, Missouri native Mr O’Malley, a long-time supporter of Barack Obama, in a simple voice vote on Thursday night, just over two months after he was named as the president’s nominee for the role.

His confirmation paves the way for Mr O’Malley to take up the job last held by Irish-American businessman Dan Rooney, who stepped down 21 months ago. He can now move into Deerfield Residence, the famous ambassador’s official home in the Phoenix Park, Dublin.

Mr O’Malley, whose grandparents came from Westport, Co Mayo, is the 27th US ambassador or envoy to Ireland since 1927 and the first from Missouri.

The veteran attorney eased through the early stages of the confirmation process in July comfortably answering questions from the Senate foreign relations committee about the state of Ireland’s economy and the challenges in the Northern Irish Peace Process.

His confirmation won support from both sides of the political aisle with the two senators from his home state, Democrat Claire McCaskill, a close ally of Mr Obama, and Republican Roy Blunt, both endorsing him during his appearance at the Senate foreign relations committee.

Until his nomination, Mr O’Malley, a former federal prosecutor and one-time seminarian with dual Irish and US citizenship, was a relatively unknown figure among Irish-Americans, at least within the community’s strongholds on the US east coast.

Speaking to Irish reporters in June about Mr O’Malley, White House chief of staff Denis McDonough described him as “a close personal friend” of Mr Obama’s and said that he would bring “a strong understanding of the religious and cultural underpinnings” and the very important foreign policy relationship between the two countries.

Mr O’Malley’s confirmation was delayed until after the Senate’s August recess, a wait that was not unusual given the level of Republican opposition to Mr Obama’s nominees and ambassadorial appointments in a gridlocked Congress.