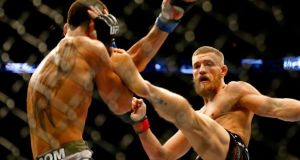 A flight from JFK Airport to Las Vegas had to return to New York after about 25 minutes because a fight allegedly broke out between two Irish passengers.

A passenger on his way to the Conor McGregor UFC fight said a row between two men became heated and ended with one of the men striking out at the other.

“Flight crew go mad, separate the two fellas and now we are on our way back to JFK again,” Damien Coyne posted on Facebook.

“I’ve been travelling since 10am Irish time yesterday morning to get to Vegas. Now unfortunately for me and a whole packed plane we are all gonna be affected by a few drunk fools. Ruining it for themselves and for everyone else,” he added.

That man was escorted off the plane after the crew called the police but the plane missed its departure slot and was held for some time before it was able to take off.

“The flight returned to JFK where the aircraft was met by local authorities and the customers were removed. The flight then continued on to its destination.”

A large number of Irish visitors are arriving in Las Vegas for Conor McGregor’s fight against Jose Aldo at the MGM Grand on Saturday night.