Death toll from Covid-19 rises to 29 in Italy with officials reporting more than 1,100 cases 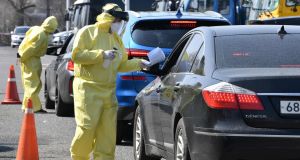 Medical members wearing protective gear talk as they check drivers with suspected symptoms of the COVID-19 coronavirus, at a “drive-through” virus test facility in Goyang, north of Seoul, on Sautrday. Photograph: Jung Yeon-Yeon-je/AFP

The first death of a coronavirus patient has occurred in the United States, president Donald Trump has confirmed.

The patient was a woman in her late 50s and was described by Mr Trump as medically high-risk. There are 22 cases recorded in the US, said Mr Trump, with 15 recovering or recovered. Further cases are likely, he said.

US vice-president Mike Pence announced further travel restrictions on Iran and US citizens have been advised to not travel to areas of Italy and South Korea affected by Covid-19.

Trump added that he was considering additional restrictions, including closing the US border with Mexico in response to the virus’s spread. But he added: “This is not a border that seems to be much of a problem right now.” “We’re thinking about all borders,” he continued. Travel to Iran is already quite limited, though some families are allowed to travel there on a visa. It is one of the seven initial countries on Mr

Eight more people have died in Italy from coronavirus, the civil protection agency said on Saturday, bringing the total to 29.

The head of the agency said the total accumulated number of confirmed cases had risen to 1,128. That figures includes some 50 people who have recovered and the 29 deaths.

Iraq has detected five new cases, four in Baghdad and one in Babel province, the health ministry said on Saturday, taking the total number of cases in the country to 13.

All five had recently returned from visits to neighbouring Iran and had been placed in quarantine, the ministry said.

All 13 cases of coronavirus detected were linked to Iran, the health ministry said. The first case detected was of an Iranian student who has since been sent back and the other 12 are all Iraqis who had visited Iran. (Reporting by Ahmed Aboulenein Editing by Frances Kerry and Andrew Heavens)

France has 100 confirmed cases, the head of the public health service, Jerome Salomon, said on Saturday, raising the tally from 73.

Of those cases, two people have died, 12 have recovered and 86 are in hospital, nine of them in a serious condition, Salomon told journalists in a daily news briefing about the outbreak. The French government banned public gatherings with more than 5,000 people on Saturday.

He said two of the patients had recently returned from Italy and the other one from Asia. The cases are from Gloucestershire, Hertfordshire and Berkshire. Prof Whitty said: “All three are being investigated and contact tracing has begun.”

Deaths from the virus have hit 43 in Iran, the highest number outside China, and the total number of infected people has risen to 593, an Iranian health official said on Saturday.

The country is at the epicentre of the outbreak in the region, with several countries in the Middle East reporting cases of the coronavirus stemming from Iran.

“Unfortunately nine people died of the virus in the last 24 hours, increasing the death toll to 43,” health ministry spokesman Kianush Jahanpur told state TV, calling on people to stay at home. Health minister Saeed Namaki on Friday warned of “a very difficult week” ahead in Iran, which only announced its first infections and deaths from the coronavirus on February 19th and where the death rate among confirmed cases has been around 10 per cent, compared to around 3 per cent elsewhere.

Tehran has ordered the shutting of schools until Tuesday and extended the closure of universities and a ban on concerts and sports events for a week. Authorities have also banned visits to hospitals and nursing homes.

Germany warned of an impending epidemic and Greece, a gateway for refugees from the Middle East, announced tighter border controls. Germany has nearly 60 cases, according to a Reuters count.

Taiwan reported a five-person jump in new cases of the coronavirus on Saturday, including four people who had contact with another infected patient in a hospital and one person returning from the Middle East, bringing Taiwan’s total to 39.

South Korea urged citizens on Saturday to stay indoors as it warned of a “critical moment” in its battle on the coronavirus after recording the biggest daily jump in infections, as 813 new cases took the tally to 3,150.

South Korea is grappling with the largest outbreak of the virus outside China, as a new death took the toll to 17, amid a record daily increase in infections since the country confirmed its first patient on January 20th.

“We have asked you to refrain from taking part in public events, including a religious gathering or protest, this weekend,” vice health minister Kim Kang-lip told a briefing.

It was a “critical moment” in reining in the spread of the virus, he said, adding, “Please stay at home and refrain from going outside and minimise contact with other people.”

As many as 657 of the new cases were from southeastern Daegu city, the site of a church at the centre of the outbreak, and 79 from the nearby province of North Gyeongsang, the Korea Centers for Disease Control and Prevention (KCDC) said.

Health authorities have run tests on more than 210,000 members and 65,000 trainees of the church linked to a majority of cases after a 61-year-old woman known as “Patient 31” attended religious services there before testing positive.

More than 88 per cent have been checked, and about 3,300 have shown symptoms such as fever, Mr Kim added.

The rapid spread of the virus has fuelled fears of a pandemic, with more than 82,000 people infected, and over 2,700 deaths in China and 57 fatalities in 46 other nations, figures from the World Health Organisation (WHO) showed on Friday.