Donald Trump has faced bipartisan criticism after failing to explicitly condemn the role of white supremacists in clashes with counter-protesters in Charlottesville, Virginia. Video Reuters 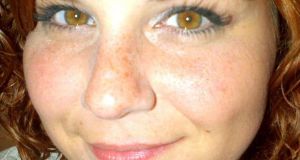 Heather Heyer (32) regularly drew attention to cases of police malpractice and racism, as well as posting her support for Bernie Sanders in his presidential campaign 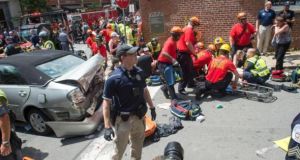 The scene in Charlottesville, Virginia after a car ploughed into a crowd of anti-racism protesters on Saturday, killing one person and injuring several others. Photograph: Paul J Richards/AFP/Getty Images

Two state troopers died in a separate helicopter crash near the scene as racial tensions spilled over during a white supremacist rally held to protest against the proposed removal of a Confederate statue.

A 32-year-old woman, who was named on Sunday as Heather Heyer, a legal assistant with a law firm in Virginia, was killed when an Ohio-registered car ploughed into a group of counter-protesters.

James Field (20) from Ohio was arrested and charged with second-degree murder, three counts of malicious wounding and failing to stop at the scene of a crash. He is due in court on Monday.

The organiser of the rally, white nationalist blogger Jason Kessler, was due to address the media at Charlottesville City Hall on Sunday, but was drowned out by protesters calling him “murderer” and “terrorist” and chanting “Shame, shame”.

The conference ended with Kessler being punched in the face by a man in a plaid shirt.

About 34 people were injured on Saturday as neo-Nazis chanting racist slogans clashed with counter-demonstrators, and law enforcement officials struggled to keep control.

Though Mr Trump called for calm from his Bedminster golf club in New Jersey, he was criticised by many for condemning “hatred, bigotry and violence on many sides, on many sides” rather than specifically condemning white supremacism.

Several figures across the political divide criticised the statement as insufficient.

Mark Herring, attorney general of Charlottesville, tweeted: “The violence, chaos, and apparent loss of life in Charlottesville is not the fault of ‘many sides’. It is racists and white supremacists.”

Republican senator Cory Gardner of Colorado tweeted: “Mr President – we must call evil by its name. These were white supremacists and this was domestic terrorism.”

The protest began on Friday night when hundreds of far-right protesters chanting phrases such as “white lives matter” and “Jews will not replace us” gathered to demonstrate against the proposed removal of a statue to Robert E Lee, the Confederate general who led the pro-slavery southern states in the American civil war. Former Ku Klux Klan leader David Duke and white nationalist Richard Spencer were among those in attendance.

Photographs from earlier on Saturday appear to show Mr Fields rallying with Vanguard America and carrying a shield bearing the group’s insignia. He wears the white polo shirt and khaki pants that are the group’s uniform.

Vanguard America were a highly visible presence at the Unite the Right rally, where they marched in military-style formation, and a torchlight rally the previous night on the University of Virginia campus.

The group’s motto, “blood and soil”, was a popular chant at both events. It is derived from the Nazi slogan “blut und boden”, which links conceptions of racial purity with a particular national territory.

Dozens of counter-protesters also descended on the town, and violence erupted before the rally was due to begin at noon, with teargas and bottles hurled at protesters.

By Saturday afternoon, the governor of Virginia had declared a state of emergency.

He said on Saturday evening that he had a message for “all the white supremacists and the Nazis who came into Charlottesville today: Go home. You are not wanted in this great commonwealth.”

Attorney general Jeff Sessions condemned the events. “The violence and deaths in Charlottesville strike at the heart of American law and justice. When such actions arise from racial bigotry and hatred, they betray our core values and cannot be tolerated,” he said.

Ms Heyer, whose Facebook cover photo read: “If you’re not outraged, you’re not paying attention” regularly drew attention to cases of police malpractice and racism, as well as posting her support for Bernie Sanders in his presidential campaign.

A friend from childhood, Felicia Correa, who launched a crowdfunding page and said she was speaking for Ms Heyer’s mother, who was not ready to speak in public, said: “She died doing what was right. My heart is broken, but I am forever proud of her.”

Tensions over the future of hundreds of Confederate statues scattered across the southern states have become a live issue in many American states in recent years, emerging as a flashpoint for racial tensions, a century and a half after the civil war ended.