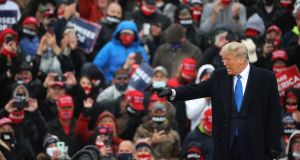 US president Donald Trump: claims Joe Biden will increase the number of refugees by 700 per cent if he is elected. Photograph: Chip Somodevilla/Getty

US president Donald Trump hit out at Somali-American congresswoman Ilhan Omar at a campaign rally in Michigan on Tuesday, claiming the first-term member of congress “hates our country”.

“You know what I think of when I think of Somalia?” he continued. “Ilhan Ohmar, who truly does not like our country . . . She likes telling us what to do, how we should run our country. She hates our country.”

Mr Trump was speaking at the first of three campaign events on Tuesday, as he left Washington for a three-day election tour through the country.

Leaving the White House, he again cast doubt about the security of the election process.

“It would be very proper and very nice if a winner were declared on November 3rd, instead of counting ballots for two weeks, which is totally inappropriate and I don’t know that’s by our laws,” he said. “We’ll see what happens.”

Mr Trump’s claim that counting ballots after election day would be “inappropriate” comes amid widespread expectations that an election result will not be available on election night given the high number of postal votes this year.

Mr Trump’s wife, Melania, campaigned in Pennsylvania, her first appearance on the campaign trail on behalf of her husband this election cycle.

Addressing hundreds of supporters in Atglen, Mrs Trump said her husband was a “fighter”.

“He loves this country and he fights for you every single day. For the first time in history, the citizens of this country get to hear directly and instantly from their president every single day through social media. I don’t always agree the way he says things, but it is important to him that he speaks directly to the people he serves.”

The US first lady, who cancelled a campaign event with her husband last week due to a lingering cough following her diagnosis with coronavirus, told the assembled guests that “we will triumph over this virus.

“This administration chooses to keep moving forward during this pandemic, not backward. By moving forward, we demonstrate a fundamental value of our nation, our ability to rise to any challenge and overcome any hurdle.”

On the Democratic side, presidential candidate Joe Biden held his first event of the campaign in Georgia, amid hopes that the Republican-leaning state could elect a Democratic president for the first time since 1992.

“I’m here to tell you we can and we will control this virus,” Mr Biden told a socially distant crowd in Warm Springs, Georgia. “As president, I will never wave the white flag of surrender.”

Former president Barack Obama also hit out at Mr Trump’s handling of the Covid-19 pandemic at an event in Orlando. “He’s jealous of Covid’s media coverage,” Mr Obama said of the president. Mr Trump has in recent days criticised the media for focusing too much on the pandemic that has killed more than 225,000 Americans this year.