As Jason Rezaian is convicted Iran hints at prisoner exchange 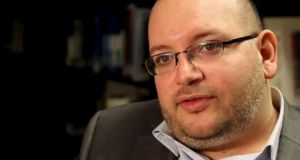 The Washington Post has said its Tehran bureau chief, Jason Rezaian, has been convicted in Iran after weeks of waiting for a verdict in his secret espionage trial.

The conviction was announced by Gholam Hossein Mohseni Ejehi, a spokesman for the judiciary, who said on state TV on Sunday night that a verdict had been reached in Rezaian’s case without disclosing further details, including sentencing. In a statement, the family said Mr Rezaian’s mother, wife and lawyer were in court yesterday to seek clarity on the verdict.

Mr Rezaian’s family denounced the verdict yesterday as the “latest cruel step in the outrageous legal process” and promised to appeal “should the verdict be anything other than a full exoneration”. Mr Rezaian has been jailed in Tehran for more than 14 months.

“He is an innocent man that has been kept under harsh conditions to the detriment of his health and wellbeing for nearly 450 days,” Mr Rezaian’s brother Ali said in a statement.

“There is worldwide condemnation for the Iranian government’s unlawful detention of Jason and calls from across the globe for his immediate release. We remain hopeful that Jason will soon be released and reunited with this family.”

Martin Baron, executive editor of the Washington Post, called the verdict an “outrageous injustice”. “Iran has behaved unconscionably throughout this case,” Mr Baron said in a statement, “but never more so than with this indefensible decision by a revolutionary court to convict an innocent journalist of serious crimes after a proceeding that unfolded in secret, with no evidence whatsoever of any wrongdoing.”

For now, no sentence has been announced. The US state department said it was closely tracking the news coming out of Iran about Mr Rezaian’s case but had yet to see official confirmation of his conviction.

“Regardless of whether there has been a conviction or not, we continue to call for the government of Iran to drop all charges against Jason and release him immediately,” said US state department spokesman John Kirby in a statement.

Mr Rezaian, who holds dual Iranian and US citizenship, was arrested at his home on July 22nd, 2014, along with his wife, Yeganeh Salehi, also a journalist, and two friends. He was held on unspecified charges for more than seven months before appearing in court. The journalist was kept sequestered for most of his time in jail with little access to his lawyers and family. In March, he was granted access to a lawyer, though not the one of his family’s choosing.

His family has said they are worried that his mental and physical health are deteriorating. Mr Rezaian’s four-session, closed-door trial was presided over by Abolghassem Salavati, a judge notorious for issuing heavy sentences.

Little is yet known about Mr Rezaian’s conviction. The International Campaign for Human Rights in Iran, a New York- based nonprofit, has inferred that the prosecution likely relied on “little more than a forced false ‘confession’.”

“The authorities have come up empty-handed when trying to validate their case against Rezaian,” said Hadi Ghaemi, the organisation’s executive director in a statement. “So they resort to their usual tactics: force a false confession, broadcast it and convict with impunity.”

Ali told the Working Group on Arbitrary Detention in Geneva that Iran had violated international law – in addition to its own laws – in subjecting his brother to interrogation, solitary confinement and a closed- door trial. Days later, Iran’s president, Hassan Rouhani, suggested his country would consider freeing three Americans being held in its prisons, including Mr Rezaian, in exchange for prisoners Tehran says are being held by the US.

“If the Americans take the appropriate steps and set them free, certainly the right environment will be open and the right circumstances will be created for us to do everything within our power and our purview to bring about the swiftest freedom for the Americans held in Iran as well,” Mr Rouhani told CNN while in New York for the UN General Assembly.

Asked by reporters whether the US would consider an exchange, US secretary of state John Kerry said he had “yet to hear directly from the Iranians” on the idea. Just weeks before Mr Rouhani’s comments in September, Ali Larijani, speaker of the Iranian parliament, hinted in an interview with NPR a prison swap between Iran and the US might be one possible way to liberate Mr Rezaian.

The comments contrast sharply with those made by Iran’s deputy foreign minister Hassan Qashqavi, who has said that no such exchange was under consideration.

Mr Rezaian is one of three Americans held in Iranian prisons . – (Guardian service)