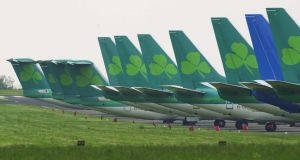 The Aer Lingus Twitter account replied to a number of passengers’ queries on Thursday evening saying ‘a piece of ground service equipment caught fire while attending to one of our aircraft’. Photograph: Frank Miller/The Irish Times

Two people have been hospitalised following a suspected oil pipe malfunction outside an Aer Lingus plane which was preparing to leave Orlando, Florida on Thursday evening ahead of Hurricane Matthew.

A spokesman for Orlando International Airport confirmed that two baggage handlers from the airport staff were injured on Thursday while loading Aer Lingus flight EI120 which was preparing to leave for Dublin.

The two injured staff members were brought to Orlando Regional Medical Centre. The severity of their injuries is unknown.

Passengers waiting to board flight EI120 took to Twitter on Thursday evening after witnessing a piece of ground service equipment catch fire beside the plane.

Colin Boylan, who was in Florida on business, said he believed an oil pipe had malfunctioned causing oil to “spurt out onto the ground and the sides of the plane” while passengers who had just arrived in Orlando were disembarking.

“About two thirds of the passengers were off already when I saw loads of kids running from the airport window. Then I heard someone screaming and adults started running.

“The air hostesses were distraught and one was visibly crying. There was drama on the ground. We were about to board the plane, there seemed to be a rushed turn around to get us out of Orlando as quickly as possible.”

Mr Boylan said the passengers waiting to board flight EI120 back to Dublin were forced to wait an hour before receiving information on the status of their flight.

“Communication was really poor, there was no announcement for one hour. It was really a disastrous situation.”

A statement from Aer Lingus confirmed that a piece of ground service equipment had gone on fire on Thursday evening.

It wrote that there were “no reports of injuries to airline crew or passengers” and that Aer Lingus was “investigating reports of an injury to a ground handling company staff member”.

“Aer Lingus flight EI 120 Orlando to Dublin on 6th October was cancelled as a result of the incident and all guests on yesterday’s flight were provided with hotel accommodation. We continue to monitor the situation at Orlando Airport and are working to minimise any further travel disruption to our guests.”

The EI120 passengers were eventually transferred to airport hotels and were awaiting updates on the status of their flight, Mr Boylan said Friday morning. Flight EI120 was originally due to arrive into Dublin airport at 9.50am on Friday.

The Orlando International Airport suspended all flights from 8pm on Thursday in preparation for the arrival of Hurricane Matthew which was expected to bring heavy rain and wind gusts of over 100 km/h.

Hurricane Matthew is expected to reach is most violent in Florida between 3pm and 6pm (Irish time) on Friday and is then expected to move northwards.

Orlando airport is “tentatively looking at re-opening” on Saturday depending on weather conditions, according to a spokesman from the airport.