France, Britain, US say UN findings point to Syrian government, and not opposition, behind attack 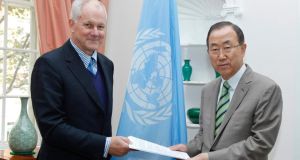 UN chemical investigators today confirmed the use of sarin gas in an August 21 poison gas attack in the suburbs of Damascus, noting that weather conditions at the time ensured the maximum number of people were killed.

As expected, the report does not say who launched the attack in the rebel-held Damascus suburb of Ghouta.

However Britain and the United States joined France today in declaring that details contained in the report confirmed that Syria’s government, not the opposition, was behind the attack.

British ambassador to the UN Mark Lyall Grant told reporters there was “no remaining doubt that it was the regime” that was responsible for the attack that left hundreds dead.

“This is the most significant confirmed use of chemical weapons against civilians since Saddam Hussein used them in Halabja (Iraq) in 1988,” UN Secretary-General Ban Ki-moon said. “The international community has pledged to prevent any such horror from recurring, yet it has happened again.”

The report by chief UN investigator Ake Sellstrom of Sweden said: “On the basis of the evidence obtained during the investigation of the Ghouta incident, the conclusion is that chemical weapons have been used in the ongoing conflict between the parties in the Syrian Arab Republic, also against civilians, including children, on a relatively large scale.”

“In particular, the environmental, chemical and medical samples we have collected provide clear and convincing evidence that surface-to-surface rockets containing the nerve agent sarin were used,” it added.

The report said the weather conditions on August 21st ensured that as many people as possible were injured or killed. Temperatures were falling between 2 am and 5 am, it said, which meant that air was not moving upwards but downwards toward the ground.

“Chemical weapons use in such meteorological conditions maximizes their potential impact as the heavy gas can stay close to the ground and penetrate into lower levels of buildings and constructions where many people were seeking shelter,” it said.

The results of Mr Sellstrom’s investigation are not surprising. Several weeks ago US Secretary of State John Kerry announced that sarin had been used in the chemical attack on the Ghouta region.

The United States said 1,400 people were killed, including more than 400 children. “The United Nations Mission has now confirmed, unequivocally and objectively, that chemical weapons have been used in Syria, ” Mr Ban told the Security Council.

He said on Friday that Syrian president Bashar al-Assad “has committed many crimes against humanity,” though he did not say whether it was Assad’s forces or rebels who were behind the Ghouta attack.

He added that Assad would be held to account for his crimes.

Syria and Russia have blamed the August 21 attack on the rebels.

The rebels, the United States and other Western powers blame forces loyal to Assad for the Ghouta attack. It is not immediately clear whether any of the details in the report suggested culpability.

Mr Sellstrom’s mandate is limited to investigating the facts, not assigning blame. French foreign minister Laurent Fabius, however, said the UN report showed there was “no doubt” the Assad government was responsible for the chemical attack.

“Survivors reported that following an attack with shelling, they quickly experienced a range of symptoms, including shortness of breath, disorientation, eye irritation, blurred vision, nausea, vomiting and general weakness,” Mr Ban said. “Many eventually lost consciousness,” he added. “First responders described seeing a large number of individuals lying on the ground, many of them dead or unconscious.”

The UN confirmation of the use of sarin gas on August 21 comes as France, Britain and the United States agreed at three-way Paris talks today to seek a “strong and robust” UN resolution that sets precise and binding deadlines on removal of chemical weapons.

Those talks followed a weekend deal on Syria’s chemical weapons reached by the United States and Russia that could avert US military action.

“I agree there should be consequences for non-compliance. Any use of chemical weapons by anyone, anywhere, is a crime,” he said.

Some Western diplomats have said on condition of anonymity that information about the type of weapons and other details Mr Sellstrom might possess could hint at government responsibility for the attack. But rebels have seized all kinds of weapons from military depots across the country in the 2 1/2-year civil war. The United Nations says more than 100,000 people have died in Syria since March 2011.